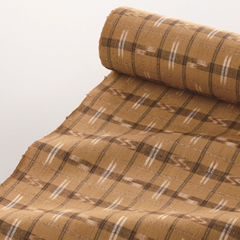 Originating in India, this method of weaving was introduced along eastern trade routes to Japan in the 14th century.
It is also thought that Kumejima Tsumugi started when someone taught the islanders how to weave after studying sericulture techniques in China. Thus, Kumejima is considered to be the birthplace of Japanese pongee. From the beginning of the Edo era (1600-1868) until the second half of the Meiji era (1868-1912) pongee was collected in lieu of taxes.

The colors of Kumejima Pongee are subdued, and a kimono can be worn for two or three generations, regardless of the age of its wearer—if a different obi sash is worn. A light, summer-weight fabric is also available. The dark shade of brown is obtained by using plant dyes and mud. This makes the skin of the wearer appear paler and the reeled yarn gives this cloth a suppleness that gracefully wraps the wearer’s body. Kumejima Pongee is still being made for kimono and obi sashes as well as tablecloths, curtains and other household accessories.

The soft coloring of Kumejima Tsumugi makes it tasteful for a long time, even for two or three generations, merely by changing the obi sash. Natsu Kumejima Ori (summer clothing) is also becoming a popular product. The color tone of the fabric itself and the dark brown dye make its wearer appear slender, with brighter, glowing skin.

Silk taken from silkworms is dyed by native plants such as rhaphiolepis umbellate or diospyros japonica. Kumejima Tsumugi is hand-made in every process. Since the fabric is woven by hand shuttle, each piece has unique unique ikat patterns created from delicate combination of threads by treading.