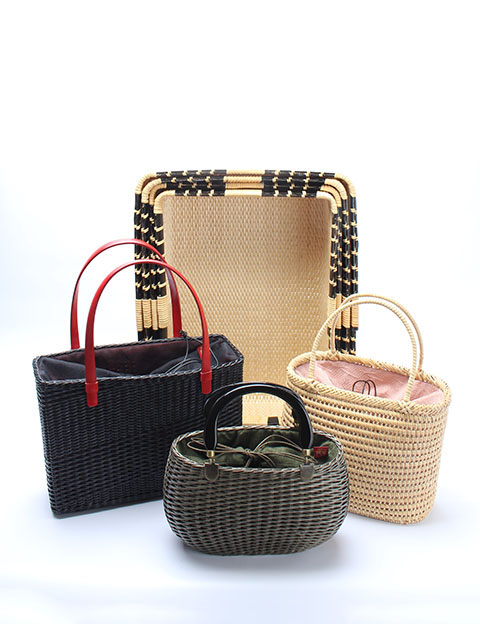 The origins of willow basketry can be traced to the 1st century AD. An early example is the Tajima no Kunisan Yanagibako, which is among the treasures held at the Shoso-in Repository in Nara.
The craft began in earnest with baskets made from Salix koriyanagi, a species of willow that grows in an area washed by the waters of the Maruyama river. Later, a castle was built in Toyooka and the craft developed into an industry. During the Edo era, the Kyogoku family protected and promoted the craft and established a monopoly, which resulted in this style of basketry becoming known throughout the country.

The wide gamut of weaving techniques includes six types of basic weaving, 33 types of in-fill weaving, and 18 different methods for finishing the edges, each chosen according to the materials used. The production of these baskets takes full advantage of willow’s flexibility when immersed in water and its resistance to bending when dried.

The various basket-weaving techniques used highlight the character of the wood, its strong and supple texture as well as its softness and resilience. These techniques include six kinds of cable stitches, 33 kinds of plaited stitches and 18 kinds of joints, all of which make it possible to create a variety of different objects.

Toyooka willow basketry takes full advantage of the properties of S. koriyanagi willow and rattan liana, which soften when soaked in water and harden when dried. Wicker cases and bags are made by weaving willow pieces with hemp yarn and are finished by hooking the edges. Baskets are produced by a more complex process. After the bottom is woven, it is attached to a wooden mold and fixed in place with a rope. Then, the sides are woven and the wooden mold is removed and the joining is performed. The baskets are finished using a variety of techniques at each stage.