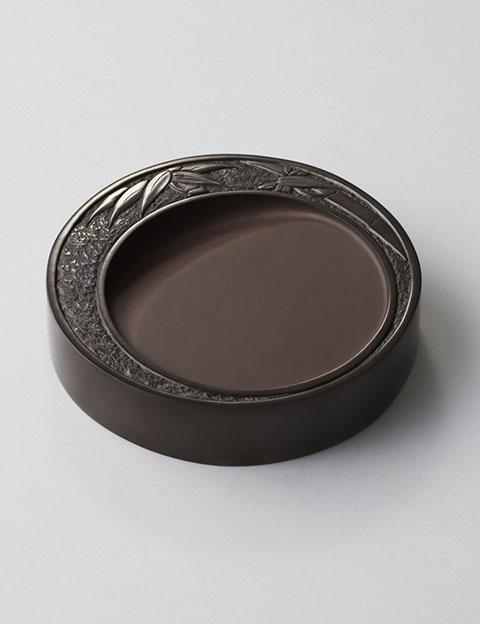 Records show that Akama inkstones were offered at the Tsuruoka Hachimangu Shrine in Kamakura at the beginning of the Kamakura era (1185-1333), and by the middle of the Edo era (1600-1868) these inkstones were being sold all over the country.
By the time Mori was leading the Choshu clan, unauthorized people were prohibited from mining the stone from which the inkstones were made. Permission to mine the stones was granted only when the feudal lords traveled to live in Edo and needed inkstones as gifts. This restriction made it difficult to obtain one of these highly prized inkstones.

Akama inkstones are characterized by their balance between hardness and softness. The beautifully patterned bed has a tight grain, which helps to quickly produce high-quality ink of excellent color and luster.

Raw Akama stones are hard and dense, with a tight grain and beautiful pattern. They are also resilient and easy to work, making them suitable an ideal material for inkstones. In addition, because the bed that provides the friction for grinding the inkstick has a tight grain, high-quality ink of excellent color and luster can be produced quickly.

Because the raw material for inkstones is generally found in layers about one meter thick, it must be extracted by digging a hole diagonally along the layer. The extracted stone is inspected and fashioned into inkstones following a dozen steps, including rough carving, raised carving, decorative carving, finishing carving, polishing and lacquer finishing. The process has remained unchanged for more than 100 years. Chisels ranging in width from 2 to 10 mm are used by master carvers using techniques handed down from their fathers.