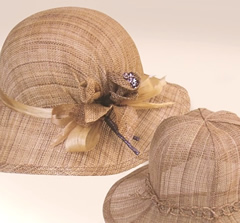 In Japan, ever since the Jomon and Yayoi periods, people have made thread from fiber derived from plants and trees that grow naturally in the mountains, including Japanese linden, mulberry, elm, wisteria, kudzu and ramie. Uetsu Shinafu textiles are an example of these threads used to weave fabric and make clothing and ornaments for personal use.
Thanks to developments in spinning technology during the Meiji era, cotton products became more common and many regions ceased producing these traditional textiles, but in this locale, they were still used for casual wear and farming wear. They were also commonly employed in fishing nets, filtering fabric, sheets and storage bags. Moving forward, the development of Japan's economy and the modernization of lifestyles resulted in a sudden drop in demand, and they barely remained in production for personal use. However, since the late Showa era (1970s-80s), there has been an increased use of traditional crafts for regional revitalization activities as well as heightened demand for rustic, simple crafts, resulting in a gradual revival of Uetsu Shinafu textile production.

Bast fibers taken from the bark of the Japanese linden, Tilia maximowicziana, and Tilia noziricola trees in the mountainous region of Uetsu is made into threads and woven into fabric.
Uetsu Shinafu textiles was used for clothing and ornaments since the Jomon and Yayoi periods, and today, the tradition continues in places like the Sekigawa region of Tsuruoka City, Yamagata, and Sampoku-machi, Iwafune-gun, Niigata. Since the raw materials are fiber from tree bark, the texture is rough, yet this rough texture possesses a characteristic stable texture, and it is made into kimono obi, as well as bags, hats, and other daily necessities.

The Japanese linden, Tilia maximowicziana, and Tilia noziricola deciduous trees used in Uetsu Shinafu textiles are are all part of the Tilia family of flowering plants.
These trees grow naturally in the mountainous areas along the Japan Sea side and Tohoku region, being called by different names including mada, manta, mouda and moada. Thread is made by spinning and twisting the the bast fibers of the trees, which are then woven on hand looms or treadle looms. Processing of the bark fiber cannot be mechanized—it’s done by hand even today.