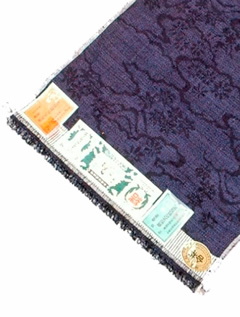 The Yuki area of Ibaraki Prefecture had been a center for sericulture, or silk farming, since ancient times. Based on this, Yuki pongee was woven during slack periods of the farming year and cloth was supplied to the Imperial Court during the Nara period (710-794).
Yuki was actually the name of the lord of the fief in the Kamakura period (1185-1333) who worked hard to protect and nurture the weaving of this cloth. For this reason, ultimately his name was given to the cloth. Its reputation was enhanced when Ina Chuji, who had become chief magistrate, introduced new techniques from Shinshu and Kyoto. Technical improvements were made upon entering the modern age, and especially with the development of ikat weaving, it became possible to produce a pongee of the very highest quality.

Because Yuki pongee threads are pulled by hand from the silk floss, and a hundred or so threads of different lengths are intertwined one by one, the yarn is representative of kasadaka fiber, which has no twist. For this reason, it has the simplicity of woven cotton, even though it is made of silk, and is used to make kimono and obi sashes.

Yuki pongee textiles are the prime representative of the kasadaka seni textile style, in which thousands of threads are hand-pulled from silk floss, each a slightly different length, and woven into fabric without any twisting of the threads. This technique produces a fabric which could be mistaken for cotton due to its rustic simplicity, but is in fact made of silk.

Each step in producing Yuki pongee fabric is completed by hand. The three primary steps of (1) pulling the threads, (2) dying them using an ikat technique and (3) weaving them on a loom have all been designated as intangible cultural properties. To make The fabric for a single kimono, nearly 30 km of thread is pulled by hand, and using a 600 g shuttle, over 30 thousand weft threads are woven. Even a single millimeter error in the weaving will disturb the ikat dyed pattern, which means the weaving is a painstakingly intricate process.