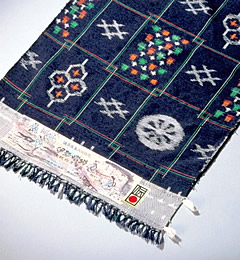 Although the history of Isesaki Kasuri dates back to ancient times, it was not until the latter half of the 17th century that a production center for this fabric was established. Also, from mid-19th century until relatively recent times, this fabric was known throughout Japan as Isesaki Meisen.
The ikat threads are either bundled and tied before being "board-dyed" in a technique called itajime, or printed before being dyed and woven into a wide variety of patterns, ranging from quite simple to very complex. In either case, these ikat threads take full advantage of the qualities of silk.

Because they’re almost entirely made by hand and involve a number of different processes, no two pieces of fabric the same pattern ever look the same, due to the idiosyncrasies of the weaver.

Due to the wide variety of ikat dyeing techniques performed by hand, even if the same pattern is used, the completed fabric can be subtly different depending on the craftsman who performed the dyeing and weaving of the threads.

A wide variety of ikat dyeing techniques are used for producing Isesaki Kasuri, including kukuri-kasuri knot-tying ikat, itajime-kasuri board pressed ikat or nassen impregnation dyeing. Sometimes two or more techniques are used for a single pattern. Due to constant innovation and experimentation in production methods, they continue to become even more complicated.