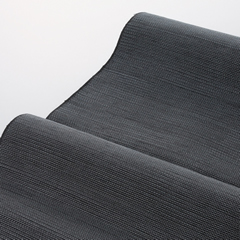 The Shiozawa area has a long The history of weaving, and an example of a linen cloth—now called Echigo linen—woven during the Nara era (710-794) is preserved in the Shosoin Repository in Nara. The skills and techniques used to weave this linen cloth were adopted for the weaving of a silk cloth that became Shiozawa Tsumugi, first woven during the Edo era (1600-1868).

This cloth is characterized by a very particular sense of quality and refinement derived from its ikat patterns which are composed of fine crosses called kagasuri—mosquito ikat—and a kikko gasuri box-like pattern, both achieved by tying bundles of thread and rubbing them in dye before weaving. The cloth is used exclusively for kimonos.

The unique, refined elegance of Shiozawa Tsumugi is produced through the techniques of kagasuri (mosquito ikat), juji-kasuri (fine cross ikat), and kikko-kasuri (turtle shell ikat) to weave a fine hexagonal pattern, combined with the ikat resist dyeing process used for the individual threads before they are woven.

Shiozawa Tsumugi is a plain weaved product made of pre-dyed threads. Raw dupion silk threads are used for the warp and hand-spun silk threads made from silk floss are used for the weft. The process is divided into creating the design, applying a base dye to the individual threads, ikat dyeing the individual threads again to create the pattern, weaving and finally, finishing. During the weaving stage, each thread is woven one by one to ensure the final pattern of the design is accurately produced.