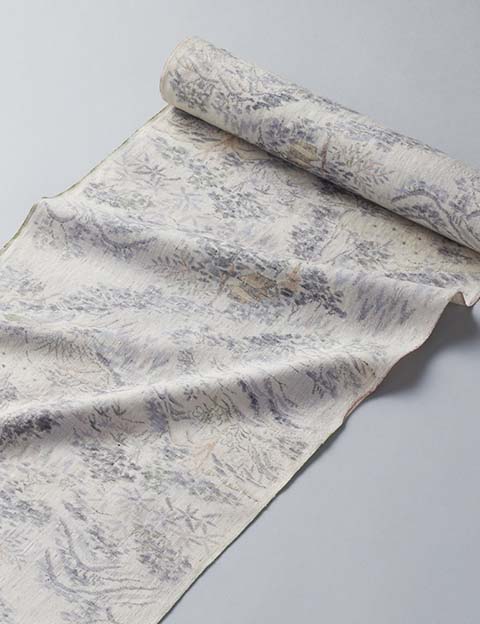 The history of linen weaving in Ojiya goes back a very long time. A piece of pottery which is thought to have been made at the end of the Jomon period (ca.10000-ca.200 BC) has been discovered bearing the imprint of some woven fabric. Well suited to the climate of Ojiya, woven linen was valued highly and was presented to the Shogun.
At the beginning of the Edo period (1600-1868), ways of improving the cloth for summer kimono were developed. It was found that by tightly twisting up the weft it was possible to produce a really cool crepe. Ojiya Chijimi, which is still made using time honored skills and techniques, was designated as one of Japan's intangible cultural assets in 1955.

The yarn for this cloth comes from the fibers of the Chinese silk plant or ramie (Boehmeria nivea). It is ideal for summer-weight kimonos as absorbed water soon evaporates, and it therefore dries very quickly. Having a crimp means that the cloth does not stick to the skin, making it very comfortable to wear in Japan's hot, humid summers. These days, besides cloth for kimono, some cloth is produced for western clothing and for interior items.

Ojiya Chijimi is made from the choma variety of linen, which has high water absorbency and dries very quickly. The slightly ruffled crimp resulting from the Ojiya chijimi process provides a nice, cool feeling, making the cloth perfect for summer.

To produce the characteristic tiny ruffles of Ojiya Chijimi, the linen threads used for the warp are strongly twisted in the spinning process. A weft ikat dyeing technique is used, so the final pattern of the fabric can only be seen after it is woven. The Chijimi ruffles are brought out through the finishing process after the fabric is woven.