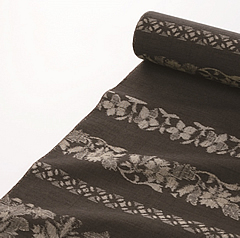 Pongee was first produced in Ojiya in the middle of the Edo period (1600-1868) when sericulture began. By the end of the same era, production had increased to the extent that silk merchants came to do business from places which had their own flourishing weaving industry, such as Kyoto or Joshu, an area that corresponds to present-day Gunma prefecture.
Ojiya Chijimi techniques were used to produce pongee suitable for home use, woven from silk yarn reeled from leftover cocoons. This pongee was overshadowed by Ojiya Chijimi but production of the pongee started in earnest at the beginning of the Showa era (1926-1989). The basis for today's pongee was perfected after a number of improvements were made to the pongee yarn.

Because the yarn used for this pongee cloth is reeled from cocoons, the threads have an interesting unevenness and make a light, warm cloth. Various folk-craft designs are implemented, and kimono using this colorful cloth provide plenty of opportunity for elegant dress. Today, the cloth is also used for interior items.

For Ojiya Tsumugi, the raw silk is first turned into silk floss before being spun into soft, light threads that carry a sense of warmth. Due to the many different folk designs used for the fabric, it can be enjoyed in many different fashions.

The raw silk is taken from cocoons before being torn, fluffed to create silk floss and spun into silk floss threads. The fabric design is produced by using a thin wooden spatula called a koba jougi to apply the dye directly to the individual threads before they are woven. After the threads are dyed, a final earmark line is applied to the threads, which is used to line them up while they are woven to complete the patterned fabric.