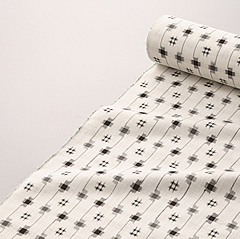 It’s presumed that Echigo Chijimi's ikat techniques were established in the first half of the 18th century. However, it was not until the latter part of the 19th century that they were used for weaving silk fabric, after a warp ikat had been successfully perfected.
Remarkable advances in ikat techniques were made at the beginning of the Meiji era (1868-1912) and tsuki-kasuri was also perfected about this time. Oiled paper, ramie yarn or bamboo grass were used to tie the threads in the early days, but in the Taisho era (1912-1926), cotton thread or flat rubber came into use.

Tokamachi Kasuri has both a traditional beauty and a contemporary sensibility. Many people love this fabric because of its luster and wonderful texture. It is widely used for fashionable everyday kimonos worn at home or on special occasions.

Tokamachi Kasuri is a folk-style woven product that combines traditional beauty with modern sensibilities. Many people love wear Tokamachi Kasuri fabric in their daily lives and appreciate its ability to bring out the unique gloss and texture of silk. Whether a piece that can be casually worn while going out, or a fashionable item for use at home, Tokamachi Kasuri fabric provides a special look for every occasion.

The warp and weft threads are first stretched across a frame according to a pre-defined pattern. While following the colors defined by the design, dye paste is rubbed into the threads with brushes as they are interwoven onto the frame. At the same time, cotton threads or rubber bands are tied around the individual threads to resist the dye using the ikat technique, creating the designed pattern as additional layers of dye are applied. The threads are then prepared for weaving, and while aligning each warp thread by hand, the final ikat pattern is produced in the weaving process.