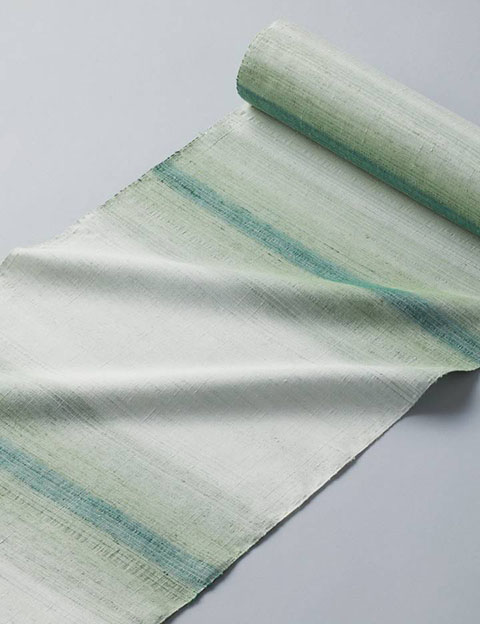 Shinshu Tsumugi traces its roots to a silk cloth called ashiginu that was woven in the Nara era (710-794). Because of clan rivalries and incentive given across the province of Shinshu, sericulture was very popular. Pongee production flourished throughout the province large quantities of fabric were dispatched to Kyoto annually.
The production of this fabric fell into gradual decline by the 1920s, with only enough being produced to keep the associate skills alive. After World War II, great efforts were made to revive this cloth, not only by the prefectural authorities but also local authorities and communities, and production once again flourished throughout the region.

Thereafter, this fabric was made with a focus on top quality kimonos, raising awareness of its quality. Most of the cloth produced in many different colors and patterns is for kimono or obi sashes. One extremely special fabric is woven from silk obtained exclusively from wild silkworms.

The primary Shinshu Tsumugi products are fabrics for kimonos and obi sashes, in many different colors and patterns. Wild oak silk kimonos, which are 100% produced from the cocoons of Japanese wild oak silk moths gathered in the mountains, can only be found in Shinshu.

Shinshu Tsumugi is a plain woven textile made of pre-dyed threads. The warp threads are made from either raw silk, wild oak silk, dupion silk taken from cocoons containing two pupa, or thread spun from silk floss. The weft threads are made from dupion silk or silk floss, and are woven into the warp threads using a hand thrown shuttle. Ikat patterns are dyed by applying and twisting the dye resistant onto the threads by hand.