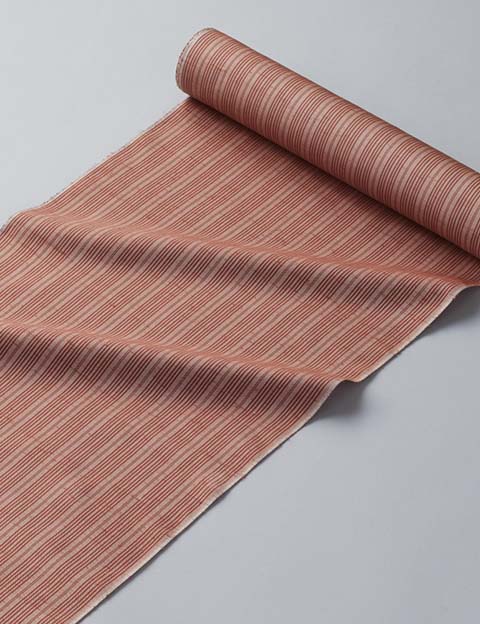 Ushikubi Tsumugi is named after a village called Ushikubi at the foot of Mount Hakuzan, where this fabric is produced. This village in Ishikawa Prefecture is called Shiramine-son today.
Ohata, a fugitive from Minamoto's defeated armies at the battle of Heiji in 1159, fled with his wife to Ushikubi where they went into seclusion. The women with him were skilled weavers and taught pongee weaving techniques to the women of the village. The first mention of Ushikubi Tsumugi cloth is found in Kebukigusa, a travel chronicle published around 1643. It is said that by the end of the Edo era (1600-1868), it was widely sold throughout the country, and reached peak production around 1935.

This fabric has a special feature of being woven with slubbed silk thread reeled from dupion cocoons, each created by two silkworms. Its distinctive luster and slubbed thread give it a simple, folk-cloth feel combined with a natural robustness and sense of quality evident when the cloth is dyed. The cloth is used to create kimono accessories, kimono and obi sashes, as well as other traditional items.

This fabric has a special feature of being woven using thick silk threads obtained from double cocoons formed by two silkworms together. The unique knots and shine in the silk threads develop a rustic beauty and simple folk-art feel through dyeing the fabric rather than leaving it its natural color, white.

Silk cocoons are selected, then made into threads, spun, refined, dyed and woven. There are fourteen major process categories, and it is all done by hand in a continuous operation using many traditional techniques. The forming of the threads is a particularly important step which determines the quality of the finished product.