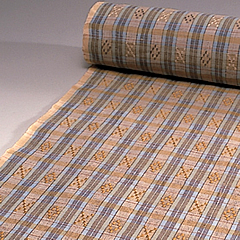 Situated on the extreme western edge of Japan, records show that weaving on Yonaguni Island dates back some 500 years, and fabric was already being paid as a tax during the 1520s. During the difficult times after World War II, fishing nets were unraveled to provide yarn for this fabric, which was still woven by women who devoted themselves to producing this fabric representative of the island's natural environment.

Some of the fabric is made into formal kimonos, which are restrained and undemonstrative in character, represented by the itahanaori shidati and Yonaguni hanaori. The yarn-dyed, plain-woven traditional fabric is used for everyday kimono that have an appealing simplicity, springing from the environment where they are woven, coupled with the sincerity of their creators.

Yonaguni Ori is a rustic fabric woven and dyed by hands of the people of Yonaguni. Varieties include patterned sidati, magnificent hana-ori, plain woven dutati for daily clothes and ridged kagan’nubu.