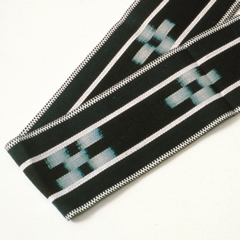 There are records confirming that a cotton cloth or minsaa that originated in Afghanistan was brought to the Kingdom of Ryukyu from China at the beginning of the 16th century and was in use at the Kingdom of Ryukyu royal court. Thus, it seems fairly certain that minsaa was already being woven in the Yaeyama area at this time. The name minsaa is derived from “min,” meaning cotton and “saa,” meaning narrow band.
In the past, a woman would give a minsaa to a man she loved, and the four or five patterns woven into the cloth were a sign of unfailing affection.

Both the warp and weft threads are cotton and the ikat threads are tied by hand. The dye is usually indigo, producing a sea-blue like background. The white pattern is then created, making for beautiful contrast. The main products of Yaeyama Minsaa obi sashes for men and women and neckties.

The origin of Yaeyama Minsaa goes back past the 17th century. Also the etymology is uncertain, although it is said that the word mensa obi (narrow cotton sash)” became “minsaa.” The kasuri is bundled by hand, dyed with indigo and woven into corduroy. The sash is worn by men. Kasuri patterns with four and five rectangular shapes are placed alternatively to pray for longevity.

Kasuri is bundled by hand, dyed ikat and woven into corduroy using a hand shuttle or tojo (blade shuttle).