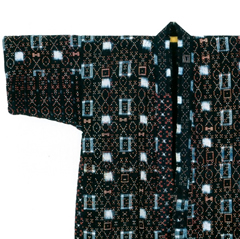 Since ancient times, Chibana Hanaori has been woven in the former Misato-son (currently the Chibana, Noborikawa and Ikehara regions of Okinawa City).
It is one type of figured textile made using the tateuki hana ori method of embossing designs vertically, and this technique was established during the latter half of the 19th century. It has been used in festival garments including the ucchaki vest, tisaji cloth, dujin undershirt, kimono and more, from the Meiji era to the present day. Okinawa suffered devastation during World War II, but Chibana Hanaori clothing continues to be used today in a traditional ceremony called Usudeku to pray for an abundant harvest and good health.

The main characteristic of this fabric is the pattern made by warp threads floating on the surface.

There are two methods, the sokobana method which uses a flower heddle, and the tibana method which does not use a flower heddle. Designs are produced by picking up the threads by hand.
1) The sokobana method uses a heddle to lift up the threads in order along a pattern to create a motif where the weft threads float on the surface of a double-weight cloth. On the surface of the fabric, the warp threads used for the design float to the surface, and the unused warp threads can be seen in long strands on the back side of the fabric.
2) In the tibana method, the warp threads used to form the patterns are picked up by hand, and this style is also called embroidery weaving. The patterns on the surface can follow the warp or the weft, and the back side of the fabric is different than the sokobana style, as there aren’t any long threads remaining unused in the pattern.