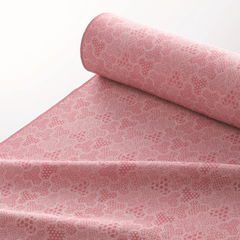 Although the history of this craft can be traced back to the Muromachi era (1392-1573), it was not until the Edo era (1600-1868) that cloth of this type was produced in quantities. Stencil-dyed cloths were used for the kamishimo, a piece of formal dress worn by daimyo, regional feudal lords who were required to reside in Edo for long periods. The resulting increase in demand for this cloth made Edo the center of its production. Originally, only daimyo and samurai classes wore garments of this cloth.
By the middle of the 18th century, however, the merchant classes were coming into their own and developed a desire to dress with more class. Gradually, even commoners were attracted to the delicate patterns as the craft continued to develop. Throughout the Edo era both men and women wore kimonos of this delicately patterned stencil-dyed fabric, but during the Meiji era (1868-1912), they became used exclusively for women's kimonos.

The techniques of this craft were fostered over many generations and resulted in a stylish, tasteful fabric of extremely fine patterns with small repeats and very simple coloring. The designs are cut by an experienced artisan with a sharp knife or special tools.

The Ise Katagami stencil used for fine-patterned dying is hand-carved by a master craftsman. Tokyo Some-komon, born of Japan’s long textile traditions, is unique for its intricate geometric patterns, and creates a refined, sophisticated impression through just a single color.

High quality hand-made washi is layered and hardened with persimmon tannin, and then cut into a ji-gami (base paper). A pattern is then cut out with a small knife to create the stencil. A white base fabric is stretched over a long board and then stencil is laid on top and covered in a dye resistant starch. The fabric is peeled from the board, and a large spatula is used to spread colored paste onto the stencil and dye the fabric. To ensure the dye is absorbed, the fabric is steamed before the dye is allowed to dry. Finally, to remove any excess starch or dye, the fabric is carefully hand-washed in cold water.