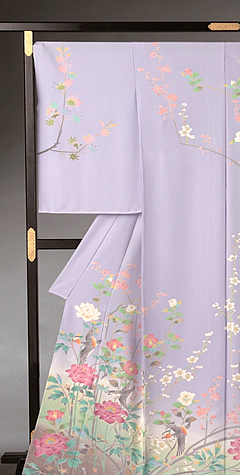 The origins of Kaga Yuzen go back to a type of dyeing called ume-zome, which was unique to the area. This dyeing technique already existed in the middle of the 15th century and can be verified through written records. Besides ume-zome, other very old methods of dyeing called kenbo-zome and iro-emon are also part of the Kaga's dyeing legacy and went fall under the general heading of okuni-zome.
Founded on these local forms of dyeing, Kaga Yuzen became established in the middle of the Edo period (1600-1868) with the aid of Miyazaki Yuzensai, who taught dyeing artisans techniques to dye patterns in a pictorial style. It was this man who originated yuzen dyeing techniques in Kyoto. Later in life, he lived in Kanazawa and spent his days there passing on his skills.

Kaga Yuzen is particularly characterized by its pictorial style, mainly using flowers and plants, realistically depicted with a gentle refinement. In cultural terms, it also reflects the taste of the Maeda family that prospered through the well-recognized wealth of the province of Kaga. They brought a subdued sense of a warrior’s grace and dignity to the forefront. The cloth today is usually used for kimonos, obi sashes and other fashion accessories.

A characteristic of Kaga Yuzen is the subdued and realistic natural plant motifs used. The regional Maeda Family culture from their prosperous past, known as Kaga Hyakumangoku, is strongly reflected in the restrained, samurai-esque elegance found in the work.

Designs are sketched onto pure white silk using a blue liquid from the Asiatic dayflower, and then fine lines of glue are put down to resist the ink. Color is applied by hand using chemical dyes and pigments. After dyeing, the fabric is steamed to set the dye. Finally, dye and glue left behind are washed away with water. Another method called itaba yuzen involves using a stencil to apply glue and then print the fabric.