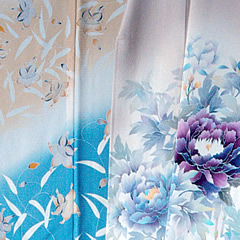 During the first half of the 18th century, Tokugawa Muneharu was the seventh in the line of Owari clan leaders that controlled an area centered on present-day Nagoya. At that time, the culture of the clan was flourishing and craftsmen of many types visited the area from Kyoto and elsewhere. The techniques of yuzen dyeing were introduced to the area during this period.

Some 19th century items have been preserved, and there are also records of the sale of a stencil paper called Ise Katagami. Given the steady, restrained character of the local people, the number of colors used was kept to a minimum. Alternatively, one color was graded to produce patterns that adhered to the subdued local taste. The deep black fabric of one of the more formal kimonos, called a tome-sode, is achieved through the torobiki kurozome technique peculiar to Nagoya, producing a fine, rich black.

The Nagoya region is known for pragmatic local colors and subdued temperaments. In this vein, Nagoya Yuzen is elegant and restrained, with limited color variation. Instead, it uses shades of a single color to create a design. Formal black kimono are made using a method unique to Nagoya called torobiki kurozome, which results in a superior, lustrous black.

Hand-painted yuzen begins with a design and rough sketch, followed by paste application, dyeing and finishing, all performed by a single artisan. Each item is completely handmade. Resist dyeing uses Ise Katagami stencils to apply paste to the yuzen. Additionally, the surizome brush technique is also common.