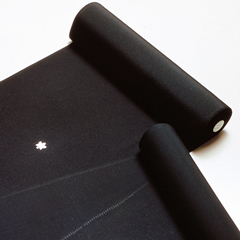 At the beginning of the 17th century, the Owari clan controlled an area centered on present-day Nagoya. At that time, the Kosakai family—a family of retainers—was recognized as the official clan dyeing artisans by the Shogun, Tokugawa Ieyasu. His order for creation of clan flags and banners led to establishment of this craft.
The dyeing of a black cloth, with family crests depicted in the un-eyed space, for clan members and others began at the end of the Edo era (1600-1868). In the middle of the 19th century, the art of dyeing became more organized in the area, and a union was formed.

In order to faithfully reproduce a family crest on a piece of dyed cloth, a paper stencil is used. The mon'ate amitsuke technique is unique to Nagoya, and although time consuming, the black color created doesn’t have a tendency to leech or fade. In the case of brush dyeing, a starch paste resist is applied and dyed by the torobiki kurozome technique to produce a rich black. Nowadays, formal kimonos and somber kimonos for mourning are the most common items created through this process.

To create cloth imprinted with family crests that stand out well, a stencil of the crest is used from the start when dip-dyeing. They are dyed using a technique unique to Nagoya called mon’ate amitsuke, which has a long dyeing time resulting in a deep black color. With brush dyeing, the shape of the crest is covered in paste to resist the dye, and the fabric is dyed with the torobiki kurozome technique, resulting in a deep and lustrous black.

There is dip dyeing and brush dyeing, and the fabric is first dyed red or blue. For dip dyeing, the family crest has stencils pasted throughout the fabric, with a metal net clamping them together before soaking the fabric in the dye for a long period, through the mon’ate amitsuki technique. For brush dyeing, the family crest is covered with resist paste and the fabric is dyed black using techniques including mitsuhiki kurozome or torobiki kurozome before being finished with a brush. Afterwards, the parts of the crest that remain white are drawn in with a brush by hand.