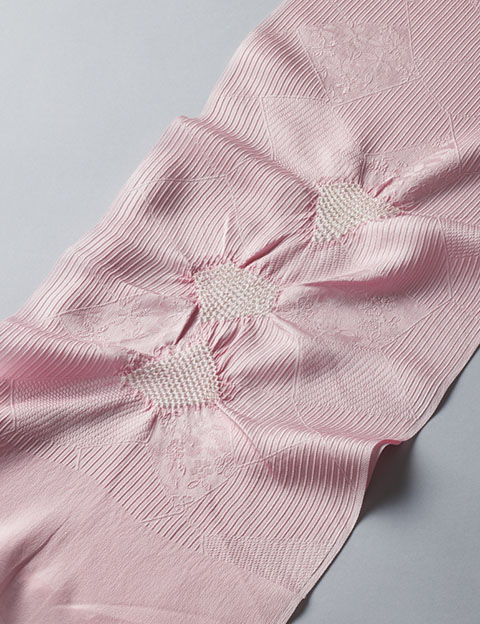 Shape resist tie-dyeing, or shibori, has existed for over a thousand years in Japan and was used for the patterns on court dress. It is known as kanoko shibori, or literally "fawn spot” tie-dyeing because of its resemblance to the spots on a young fawn.
From the Muromachi era (1333-1568) through to the beginning of the Edo era (1600-1868), the tsujigahana style of dyeing was extremely popular, but by the middle of the Edo era, Kanoko Shibori reached its Golden Age. Since then, shibori artisan skills have been passed on from one generation to the next.

There are no other examples of tie-dyeing with such fine and accurate binding as the Kanoko Shibori techniques, known as as hitta shibori and hitome shibori, nor do any others have such distinctive three-dimensional qualities. Patterns are expressed through a combination of the individual qualities of each technique. Kanoko Shibori is used to create patterns on kimono fabric and obi sashes, as well as products including wall-hangings and interior articles.

The refinement of the binding techniques employed in the hitta shibori and hitome shibori methods known as kanoko, as well as the unique three-dimensional effect produced by these techniques, are unparalleled even among other fabrics dyed with shibori techniques. Furthermore, the expressive power of individual binding technique is further enhanced in patterns produced by combining techniques.

Rough sketches are drawn directly on the fabric before it is bound by craftsmen with expertise in their respective technique. Next, the fabric is dyed by immersion after oke shibori and boshi shibori (resist dyeing for multicolor dyeing). Then, the fabric is dried and the threads are removed before the fabric is steamed and tentered.