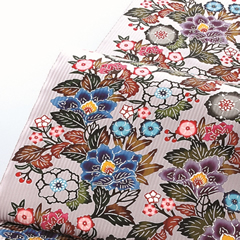 The origins of Ryukyu Bingata dyeing can be traced back to the middle of the 15th century, when King Shoen was on the throne. The court gave its unfailing patronage to the craft and according to an 1802 chronicle, Ryukyu Bingata was called "the floral cloth of the East," highly regarded at the market in Fuchien, China.
Although almost completely wiped out during the Second World War, efforts were made to revive this craft. In 1950, the Bingata Preservation Society and the Okinawa Bingata Preservation Society were formed. This was followed by government recognition in 1984, when bingata was formally designated as a Traditional Craft Product.

Bingata dyeing is the only dyeing craft in Okinawa combining the techniques of stencil dyeing from China and the hand dyeing skills of Kyoto Yuzen. Silk, cotton and abaca, which is a banana fiber cloth, are hand-dyed using pigments and vegetable dyes. The cloth known simply as bingata is brightly colored, while eshigata is vat-dyed with Ryukyu indigo. Each one has an enigmatic appeal peculiar to the South Pacific.

Ryukyu Bingata is the only dyeing technique in Okinawa and uses techniques introduced from China and Kyoto. Cotton, silk or bashofu textiles are hand-dyed with pigments and plants. Magnificent bingata (red) and eshigata (indigo) are the most common. Both have a fabulous charm unique to the tropical Okinawan islands.

Ryukyu Bingata is made by either Katatsuke (stencil dyeing) or tsutsu biki, which directly applies patterns to the fabric that are painted after gluing. There are two color tones: bingata (red) and eshigata (indigo). The stencil for dying is made of Japanese washi paper bonded by persimmon juice. The stencil is underlaid with rukuju (dried tofu) while carving. Patterns on the fabric are dyed by irosashi technique, and then kumadori (ombre painting) is applied to add a stereoscopic effect.