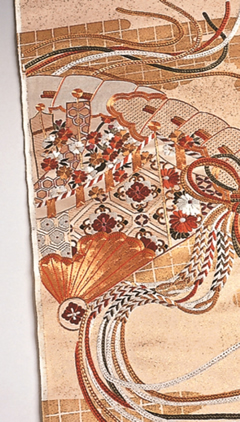 Closely linked with the spread of Buddhism in the area, embroidery was introduced to the province of Kaga from Kyoto in the Muromachi period (1392-1573) and was used for the decoration of such religious trappings as altar cloths and surplice worn by monks.
During the Edo period (1600-1868), embroidery came to be used to decorate many personal items and such things as an over garment called a jinbaori, which was worn by military leaders when they went into battle. The kimono worn by noble ladies, too, were also sometimes embroidered, the dignified elegance of such garments pleasing them greatly. With the attentive patronage of successive generations of Kaga clan leaders who prized and gave their encouragement to culture and learning, Kaga Nui developed individual characteristics and a degree of perfection to match Kanazawa Haku and Kaga Yuzen.

The attractiveness of the motifs and patterns that are so carefully embroidered using a full palette of colored silks as well as both gold and silver threads is, without a doubt, one of the special features of Kaga Nui. Its glowing, heart warming beauty embodies the courtly nature of this wealthy province and the sincerity and sense of pride of its people fostered by the severe natural conditions in this area of the archipelago. As in the past, embroidery is still used to decorate top quality garments including the kimono as well as obi and fukusa, a tea caddy wrap used during the tea ceremony. Embroidered panels for screens are also made along with a number of other decorative items.

Gold and silver threads, as well as a variety of colored silk threads are used one by one to stitch beautiful patterns and pictures, which are the feature of Kaga Nui. The brilliant and warm beauty of the designs reflect the refined culture of the Kaga Hyakumangoku, as well as the pride and devotion of the Kaga people who were brought up in a land of severe wind and snow.

The stitching work uses fifteen kinds of traditional techniques and methods, creating dainty and dignified designs one stitch at a time.