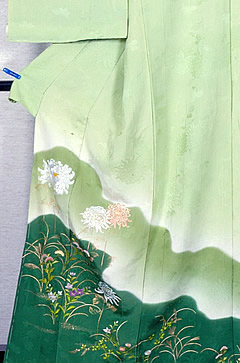 Kyo Nui probably dates back to 794 when the new capital of Heian Kyo (Kyoto) was established and a department of weaving were many embroiders worked was set up at the imperial court.
Until Miyazaki Yuzensai perfected the yuzen dyeing technique in the middle of the Edo period (1600-1868), embroidery was an important method of decorating fabric along with "fawn spot" tie-dyeing and the application of gold and silver leaf. Embroidery had a particularly important part to play within the new, richly embellished kanbun style of kimono cloth favored by merchants who had grown wealthy. The Kakefusa, a cloth at Kofukuin temple in Nara Prefecture is a very good example of the kind of very high quality embroidery that was done in the middle of the 18th century.

Reflecting something of the splendor and refined taste of the Heian period and using well established traditional techniques, Kyo Nui is done using gold, silver and silk threads, usually either on a silk or linen ground.

Silk and hemp fabrics are embroidered with gold and silver threads by means of refined traditional techniques in order to convey a splendid and exquisite sense of peace.