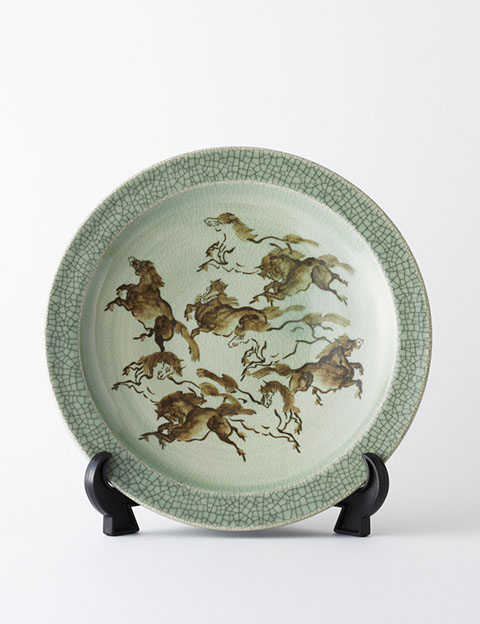 History indicates that the origins of Obori Soma Yaki go back to the end of the 17th century.
The kilns flourished under the patronage and protection of the local Soma clan, and by mid-19th century, there were more than 100 people at work, making it the largest production center in the Tohoku region of northern Japan. With changes that took place in the commercial sector at the start of the Meiji era (1868-1912), the number of working kilns dropped, and today there are just 24 at work. However, fueled by the 300 year-old heritage of ceramics in the area, the artisans’ creative spirit is still very much alive.

The majority of pieces are glazed with a clear, glasslike celadon glaze, verging on green. Crazing (hairline cracks) is a common feature of these wares that makes them even approachable. The celadon glaze is sourced locally, but it isn’t the only one—an ash glaze, amber glaze and a white slip glaze are also used. Today Obori Soma Yaki now includes vases, tea bowls, cups and flasks for sake, among other distinctively decorated pieces.

Obori Soma Yaki is primarily known for producing ceramic pieces coated in a glaze of celadon blue. Another well-known characteristic of Obori Soma Yaki pieces is the ao-hibi, or cracked blue pattern, that covers the pieces—fine cracks within the surface. The stones used for producing the celadon blue glaze can only be found in the Obori region of Fukushima, Japan. In addition to celadon blue, ash colored glaze, clear glaze and white glaze are all used for these ceramic pieces.

Local clay earth is used to make the clay used in the pieces. Soil is immersed in water, reduced to mud and then separated into the clay be used for pottery and other components that are discarded. The mud sorted this way is dried and made into pottery clay, and the well-kneaded clay is shaped on a potter’s wheel. Once the clay is shaped, it is dried in the dark. When it is completely dry, the piece is fired in a kiln at about 950 degrees. After the clay is fired, a picture is drawn on the surface. The famous hashiri koma (running horse) drawings can only be found in Obori Soma Wares. After the picture is drawn, the surface is covered in glaze and then fired a final time at 1,250–1,280 degrees to finish the piece.