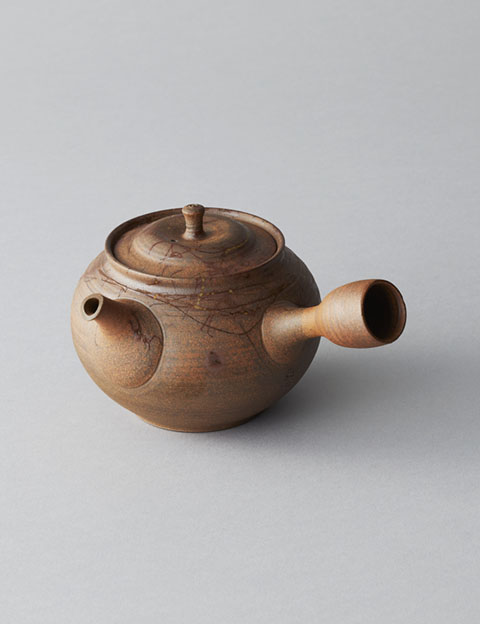 Pieces representing the beginnings of Tokoname Yaki were made at the end of the Heian era (794-1185) and it is now counted among Japan's six oldest kilns. During the Heian period, kyozuka urns were made to insert Buddhist sutras into before burial as a way of asking favors of Buddha. During the Muromachi ra (1392-1573), Tokoname Yaki mainly produced tea bowls and other tea ceremony items, as well as ikebana flower vases. Jars appeared in the middle of the Edo era (1600-1868) and normal household tableware began to be produced at the end of the Edo period, alongside the prized tea ceremony pieces. Sanitary items such as drain-pipes, wash-hand basins and toilets, tiles and plant pots were added to the list of products in the Meiji era (1868-1912). Undoubtedly, the vast range of products available today is a result of being a production center with plentiful supplies of good quality clay at hand and the area's ability to change its core product lineup to meet demand throughout history.

The red coloring which develops because of the iron in the clay is a special feature of these wares, and while some of the pieces develop the full qualities of the clay, others are glazed. The product line is mainly composed of traditional items including items for tea ceremony, vases, ornaments, decorative plant pots, bonsai trays and jars and larger pots.

The red color from the iron in the clay is characteristic of Tokoname Yaki. Items that enhance the character of the clay, glazed products and many other items are available.

Many different large and small items are made using techniques ranging from a traditional potter's wheel, to hand forming and casting. The clay used as the base material has a stickiness and the particles are very fine, so it can easily be formed through carving and polishing. In this way, many products are produced using techniques befitting Tokoname Yaki.