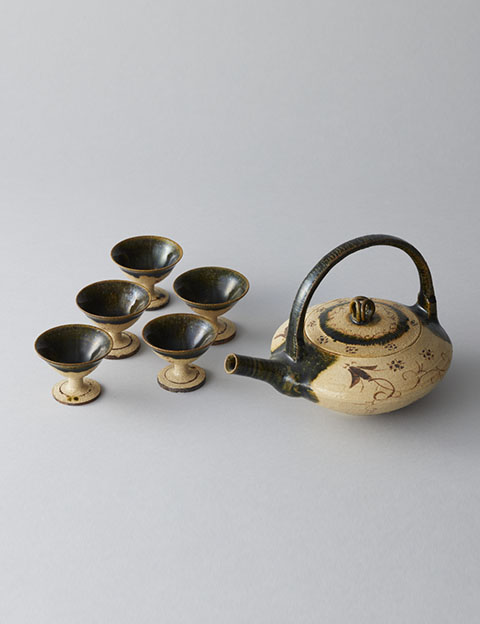 Akazu Yaki dates back to an earthenware called Sueki that was made about 700, during the Nara period (710-794), although the traditional skills, techniques and nomenclature of Akazu Yaki that are still in use today were established during the early years of the Edo era (1600-1868). In the period slightly prior to this, the glazing techniques that are still in use today, namely shino, oribe, kizeto, and ofuke, were established.

Seven main glazes are used in total. In addition to this, some 12 different techniques are employed, including hera-hori, in which a modeling tool is used to make a pattern on a formed piece. For inka, motifs are created using a stamp after being formed in a mold. Using a bamboo or metal skewer, parallel lines, wavy lines, spirals, or a pattern of dots are made on the clay while the surface is still soft for kushime. For mishimade, using a technique coming from Korea, a pattern of chrysanthemums is created in a white slip wash on a dark grey background. Making full use of these techniques, tetsu-e decorations, which have been in use since the Momoyama period (1573-1600), are added with iron. Today, items associated with tea ceremony and ikebana are central pieces of Akazu Yaki, along with dishes used at top quality Japanese restaurants and in homes. All are highly praised by specialists as handmade articles of the very best quality.

Akazu Yaki features twelve distinctive techniques including seven kinds of glaze, patterns carved into the clay with a spatula called a hera-hori, pressed into it with stamps called inka, etched into still-soft clay with bamboo or metal combs to make straight lines, wavy lines, spirals, and perforated lines called kushime, a technique from Korea where dark gray clay is decorated with a white clay slip in a chrysanthemum pattern called mishimade, and more. These techniques are incorporated freely and designs are painted on using iron in a technique that has been handed down since the Momoyama era. The handmade luxury items are valued highly by collectors—mainly tea ceremony items, ikebana flower arrangement apparatus and dishes for Japanese fine dining.

Clay is shaped using a potter’s wheel, slab work and hand forming. Well-kneaded clay is placed on a potter’s wheel and formed by hand while the wheel spins. Since long ago, it has been said that to master hand forming takes three years, while the potter's wheel takes ten years to master. Slab forming is done by slicing a uniform thickness of clay and pressing it into a form (made of wood, clay, or stone) to create the desired shape. Hand forming involves shaping the clay by hand to make a coil or a bag shape for use in forming many shapes including animals, flower vases, and more.