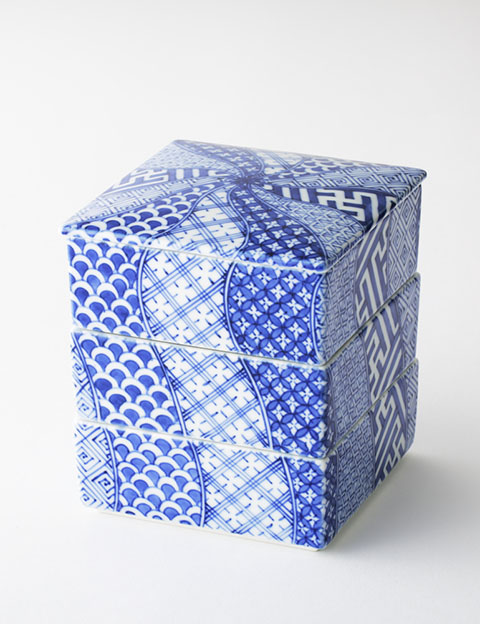 At the beginning of the 19th century, local people returned from Kyushu armed with techniques for firing porcelain and a way of applying decorations using a soft Southern Sung Dynasty style of painting with great charm they had learned from a specialist painter.
Learning from each other, great developments were made, and all the skills and techniques for these unglazed wares were finally established by the middle of the same century. Methods peculiar to this ware were gradually developed through motifs derived from the local nature of the area by decorative artists whose efforts were finally rewarded.

In the Meiji era (1868-1912), production of this decorated porcelain was perfected further and expanded to include the making of large pieces such as jubako or stacking boxes, lamps, tables and more regular line of tableware, all of which are still being made today.

The greatest feature of Seto Sometsuke Yaki lies in the way the detailed patterns are applied with a brush directly onto the surface of the unglazed clay. Special features include thetechnique of firing to obtain a tasteful design and the technique used to apply the detailed patterns of birds, flowers, insects and scenery with a brush on the surface of the porcelain using an indigo blue glaze. A great deal of tableware is made alongside articles used in the tea ceremony, items associated with incense, and other interior items.

The main characteristic of Seto Sometsuke Yaki is how delicate designs are sketched directly on the bare surface after bisque firing. Indigo porcelain paint is used to paint birds, flowers, insects, and landscapes on the surface of the porcelain in fine detail. This, as well as the firing techniques used that give the pictures a wet look, are unique to this craft.

Potter’s wheel, casting and hand forming methods are used to create Seto Sometsuke Yaki. The bisque-fired works are painted with designs, or works bisque fired at a low temperature are painted with underglaze decoration before final firing.