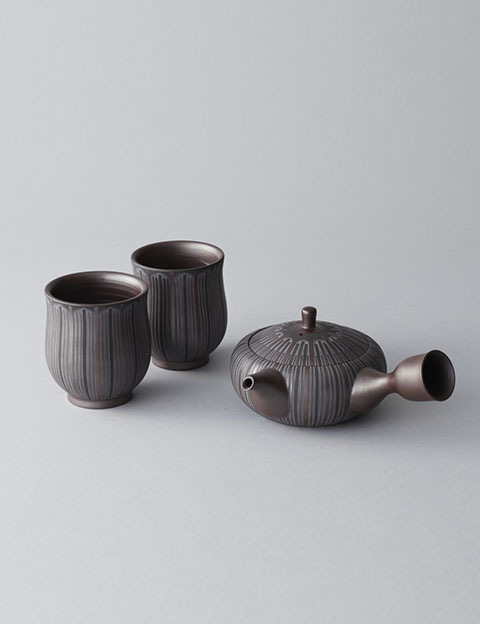 Around 260 years ago there lived a wealthy merchant, Nunami Rozan. He was a knowledgeable proponent of tea ceremony and was interested in pottery. In fact, the name Banko Yyaki or Banko Wares originates from pieces he made himself. He stamped them with banko fueki, or literally "eternity, constancy," hoping they would be handed down through endless generations after he was gone.
These wares, in fact, were not made for a time after his death but were revived toward the end of the Edo era (1600-1868). The pieces of Yokkaichi Banko Yaki being made today spring from research and the revival of techniques during the Meiji era (1868-1912). The distinctive porcelain and pottery produced continues to reflect the fashion and taste of each age.

For hundreds of years Yaki teapots have had a strong following amongst tea fans, not simply because they add to the enjoyment of the beverage but also due to how these unassuming teapots take on a refined, distinctive luster with years of use. Cups, sake flasks, vases and ornamental pieces are also produced.

Tea lovers have always cherished Banko Yaki teapots, which not only improve the flavor of the tea, but also develop a unique gloss the longer they are used.

Good quality kaolin and pottery stone found near Yokkaichi is used as clay, and the potter's wheel, molds, and hand forming are used to form the clay. Once the clay is formed, patterns are painted and etched into it. The pieces that are fired without glaze are well-known. Some pieces have designs painted on after firing.