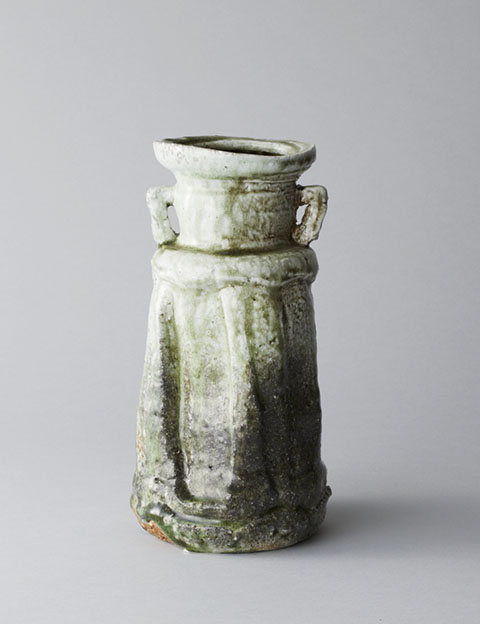 These wares date back to sometime between the second half of the 7th century and the start of the 8th. At the time, a type of earthenware called Sueki was being fired, and in its early days, seed pots used by farmers were being made. Subsequently it was also used to produce temple roof tiles.
Much later during the Momoyama era (1573-1600), when tea ceremony became popular with the warrior class, the name of Iga Wares—associated with tea bowls in particular—became well-known throughout the land, due in no small part to the fact that the feudal lord of the Iga Ueno clan was very knowledgeable about tea and pottery. From the beginning of the Edo era (1600-1868), the thickness of these wares was reduced under the tea master Kobori Enshu and called Enshu Iga. By the 18th century, the foundations of the present-day production center for Iga Yaki were established.

More robust than the Shigaraki made in a neighboring district, Iga Yaki is also slightly heavier. Various changes occur during firing to produce variations in color and shape. It is these “yohen,” or "happy accidents," that characterize these wares, including glaze with a glass-like quality and surface stains from firing against the sturdy forms and colors of the pieces. Today, everyday tableware is made alongside traditional earthenware, flower vases and teacup and teapots. It is the responsibility of the craftsmen to sustain this most ancient form of pottery.

Iga Wares are harder and somewhat heavier in comparison to the nearby Shigaraki Yaki. Depending on the conditions inside the kiln during firing, the color and shape of the pieces change in a phenomenon called "yohen," but the way a glass substance called vidro and the glaze scorches, and the shape and color of the pieces themselves, are what distinguishes Iga Yaki.

There are two methods in creating the clay used: first, dry clay is broken down as-is before being dissolved in water and strained. The resulting clay is formed using a potter’s wheel, coil work or slab work. Then, the surface is marked with cloth, a spatula, or other tools before bisque firing, and is painted and glazed before a final firing.