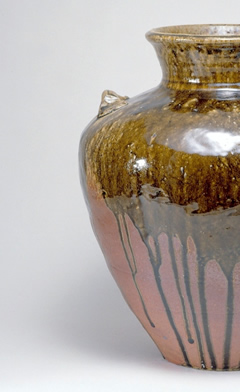 Echizen Yaki ranks among Japan's six oldest kiln locations and has a history dating back many centuries. First fired toward the end of the Heian era (794-1185), over 200 old kilns sites have been discovered in the area to date. All types of everyday articles, including pots, jars, mortars, flasks, and jars that held black tooth dye fashionable at the time were fired in these massive old kilns.

Glazes are not used to create an appealing surface texture in Echizen Yaki, which instead relies mainly on accidental effects during firing, including those from wood ash and iron. No attempt is made to decorate pieces, but they have a beauty of their own, appropriate to everyday wares retaining warmth from the clay they’re made from. Sake cups and flasks, flower vases, teacups and pots as well as a wide range of everyday items are still being made by the craftsmen, who have the responsibility of sustaining this ancient pottery craft.

This pottery has rustic characteristics of glaze-less bisque-firing, kaiyu (ash glaze) and tetsuyu (iron glaze. The pots possess the no-frills beauty of daily use items and the warmth of the clay they are fired in.

Echizen Wares are made by molding a special clay into shape for pottery made from three main kinds of clay: aoneba, akabeto and taiko tsuchi, dug from the bottom of local rice fields. Echizen pottery’s distinctive molding method, a coiling technique called nejitate, has been handed down through the centuries and is still used today. The molded clay is then fired in a kiln at 1,200—1,300 degrees.