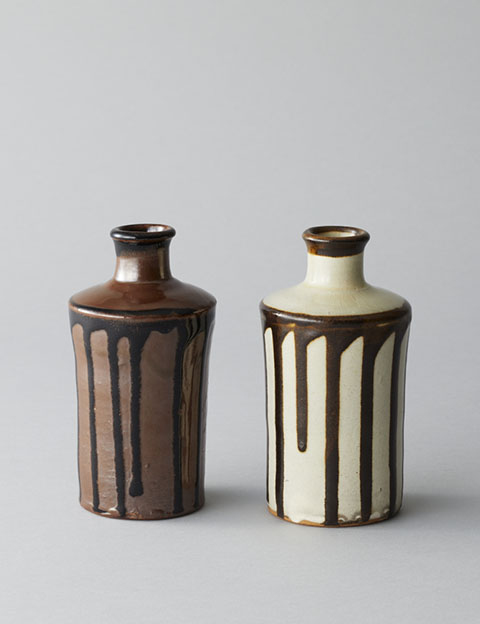 Numbering among the six oldest kilns of Japan, Tamba Tachikui Yaki traces back to the end of the Heian era (794-1185). A "hole kiln" or anagama was used up until the Momoyama era (1573-1600) but then nobori gama or “ascending kilns" came into use along with the kick wheel, which is turned counter-clockwise in this area. The nobori gama and traditional techniques are still used today.
In the early days, large pots were made, but with the arrival of the Edo era (1600-1868) many famous pieces of pottery were created for tea ceremony under the guidance of the tea master Kobori Enshu. Such articles are still being made along with various pieces of crockery, sake flasks, vases, ornaments and large plant pots.

Using ash and iron glazes, everyday articles with a rustic timbre are the mainstay of Tamba Tachikui Wares. Those fired in a nobori gama take on a very distinctive coloring and surface texture due to ash from the pine logs used to fire the kiln blowing around. The ash mixes with the glaze to produce interesting and accepted effects called hai kaburi, giving each piece its own individual character.

Because they are ash glazed and iron glazed, these no-frills pots exude the rustic beauty of everyday commodities. As these pots are fired in the ascending kilns, the ashes of the pine firewood used in the oven melt onto the applied glaze and causing deformations and color variations, creating peculiar patterns called “hai kaburi” (ash marks). The appearance of these patterns varies from piece to piece, giving each unique character.

The manufacturing process is divided into the following stages: clay preparation, molding, decoration, painting, glazing and firing. Even though the shapes are mostly created on the potter's wheel, techniques such as tatara, or hand-molding, and stamping are also used. The process is a true example of “piecemeal manufacturing,” as articles are created one by one, from working the clay to finishing the products. When glaze is not applied, pots are baked in ascending kilns or hole-type kilns.