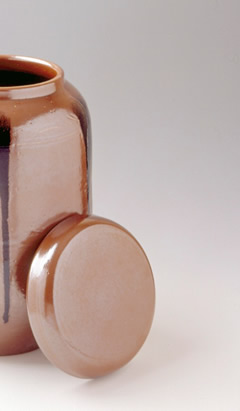 Around 1763, Morita Motozo—who lived in the province of Iwami—learned how to make pottery from a potter from present-day Yamaguchi Prefecture, and he began making small items such as lipped bowls and sake flasks. Some 20 years later, it seems that he also created larger pieces of pottery, including water jars, that found their way into the area from present-day Okayama Prefecture.

Using a clay similar to that used for porcelain, most of the pieces produced are either glazed with a light brown glaze made from an iron-rich mineral, or have a transparent glaze made from another mineral containing an alkali. The latter turns ochre when complete combustion occurs, and green under incomplete combustion. Iwami Wares include kitchen items alongside water jars and suribachi, a ridged mortar bowl used for grinding sesame and more.

Iwami Wares are mostly made with a clay similar to that used to make porcelain, and are given a brown glaze made from local stones containing iron, or a transparent glaze made with stones containing an alkali. The transparent glaze turns ochre if fired after the flames have completely combusted, and it turns blue-green if fired under incomplete combustion conditions.

The clay used for these ceramics is found in the Iwami region. This soil is immersed in water, reduced to mud and separated into the clay that used for pottery and other components that are discarded. The mud sorted this way is dried, made into pottery clay and then molded into shape through techniques including turning on a potter’s wheel, or tatara. Once molded, the pots are allowed to dry in the shade and then fired at 1,300 C°.