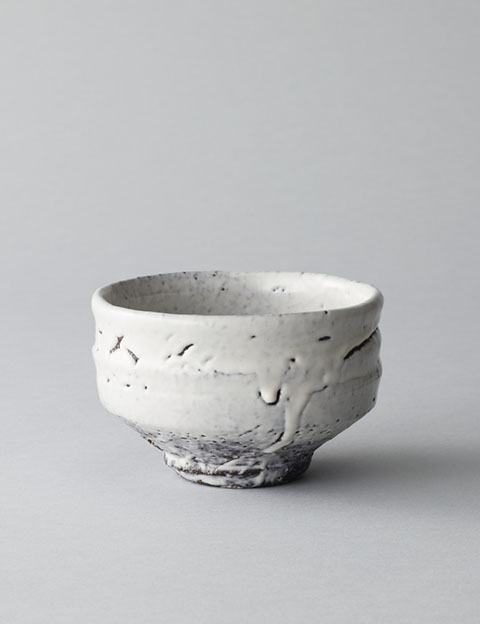 Returning from a campaign with Toyotomi Hideyoshi on the Korean peninsula, feudal lord Mori Terumoto brought two Korean potters back with him to Japan, Li Sukkwang and Li Kyong. These two brothers were responsible for commencing pottery work which marked the beginnings of Hagi Yaki 400 years ago.

When Mori Terumoto took up residence in a castle in Hagi, Li Sukkwang was granted permission to build a kiln to create pieces of pottery for the fief. The results were the first real pieces of Hagi Yaki. After Li Sukkwang died, his brother continued the work and the feudal lord of Hagi gave him the Japanese name Hagi Kouraizaemon, which continues to be used to this day.

Early pieces of Hagi Yaki owed much to the style of pottery popular in Korea at the time. Gradually, however, a rustic character was imparted to Hagi Yaki, which developed into a highly unique style still in use today.

Hagi Yaki’s most distinctive feature could be its rustic quality, which is partly the result of minimal shrinkage during firing. Additionally, the finished wares are highly absorbent. Being absorbent means that as a piece is used for tea or sake over the years, it gradually becomes stained and changes color. This phenomena was particularly admired by tea aficionados and was termed cha-nare, literally meaning “tea maturing,” indicating that as a piece is used, it takes on an aesthetically pleasing, matured appearance.

Another feature of Hagi Yaki is its simplicity in form and decoration. In fact, Hagi Yaki almost never has any under- or over-glazing, or painted decoration. Instead, its true appeal comes from how the potter knows which effects to expect during firing in a nobori gama, or “ascending kiln.” This is especially true in regard to how different combinations of clay will react, the application of glaze and marks made with modeling tools.

The main features of Hagi Yaki include its soft sheen with less thermal shrinkage and high water-absorbing properties. Because of its high water-absorbing properties, if vessels are used over the course of many years, tea and liquor will seep into them, causing their color to change. Among tea ceremony aficionados, this change in color is known as cha-nare and it is very much appreciated. Another characteristic is its simplicity in forms and decorations. In most cases, Hagi Yaki pieces are not painted. Because the blend of clay used, glaze, spatula marks and other conditions all produce different patterns as a result of being baked in ascending kilns, each piece is designed to make optimal use of these peculiarities.

Mishima-tsuchi clay and a local clay called ji-tsuchi clay are added to the main ingredients, daido-tsuchi clay and mitake-tsuchi clay, to create a pottery clay for manufacturing Hagi Yaki. After the clay has been molded into shape by turning on a potter's wheel, molding by hand, or tatara, engobes, inlays and engravings are applied and the pieces are bisque-fired. After bisque-firing, glaze is applied. When the pots have been glazed with a transparent or white glaze, they are then fired in an ascending kiln. Once in the kiln, the glaze tone on the parts that come into direct contact with the flame changes; this change is referred to as yohen.