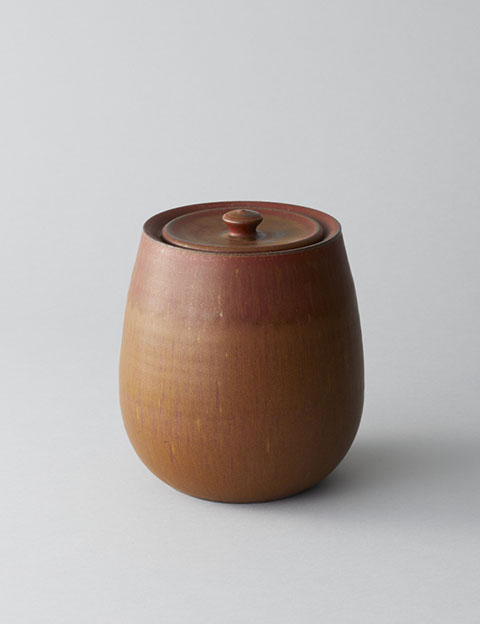 Agano Yaki dates back to the 17th century, when Hosokawa Tadaoki, who became the feudal lord of the Kokura clan in 1602, invited a Korean potter to come to Japan. He asked members of his clan to construct a nobori gama—a famous “ascending kiln”—in Agano.
Tadaoki was personally instructed in the art of the tea ceremony by Sen no Rikyu, the man responsible for establishing the Senke school that still exists today. For a feudal lord, Tadaoki was deeply respected in tea ceremony circles. A number of very fine pottery pieces that were met with Tadaoki's approval was fired in this kiln. Subsequently, under the management of the clan, many of the tea bowls and other tea ceremony items made found favor with Kobori Enshu, who was a famous tea master at the time. As a result, the Agano kiln became one of the seven kilns favored by Enshu.

There is much to enjoy about Agano Yaki, including the way the glazes run and its coloring, the qualities of the surfaces, its luster and the changes that occur during firing. Hardly any of the pottery is figured and most of it is glazed. As they were developed for use in tea ceremony, many of the pieces have a characteristic lightness and beauty. To this end, tea bowls are certainly still being made, along with sake cups and flasks. Tableware, vases, incense burners and other decorative pieces complete Agano Yaki’s repertoire.

Agano Yaki can be enjoyed through its varied coloring, glaze flow, touch, gloss and variations that occur during firing. Agano Yaki also favors gloss over paintings. Originally developed as pottery for tea ceremony, it is often thin and always very chic.

Methods used may include wheel throwing, striking, hand-twisting, foot bellowing, pressing, casting and more, but wheel throwing is the most popular technique. Patterns are created on the base material by cosmetic chipping, brush marking, carving, combing and other techniques. When applying paintings to thin Agano Yaki pieces, they are first biscuit fired and then painted before being fired at 1,200°C to complete.