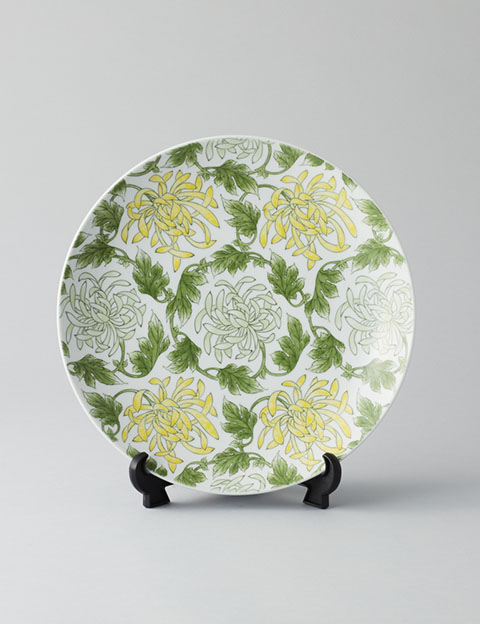 Imari-Arita Yaki dates back to the end of the 16th century, when the Saga clan, who were involved in Toyotomi Hideyoshi's campaigns in Korea, brought back the potter, Li Sanpei who discovered porcelain stone at Mount Arita Izumi in northern Kyushu. The porcelain that was subsequently made there was the first to be produced anywhere in Japan and was originally called Imari Yaki, simply because it was shipped through the port of Imari.

Imari-Arita Yaki has qualities ranging from a simple blue and white pieces to pieces over-glazed with brilliant colors. From the styles including Koimari, Kakiemon, Kinrande and Nabesima, it was the beauty of Koimari and Kakiemon porcelain that really appealed to people in Europe. In fact, during the Edo era (1600-1868), large quantities of Imari Arita Yaki was exported through exclusive Dutch trading facilities in Japan.

Today, Imari-Arita Yaki still includes fine pieces of Japanese and Western tableware produced alongside decorative items. Yet inevitably, the brilliance of its enamels and brilliant white surfaces, as well as its practicality, continue to characterize Imari-Arita Yaki, Japan's most famous porcelain.

Imari Yaki and Arita Yaki are both porcelain brands known for their beautiful white texture, glamorous paintings, and usability and durability as tableware.

Crushed pottery stone powder is mixed with water to make clay that is molded or wheel-throwed into a shape and biscuit-fired at low temperature. It is fired again at high temperature (around 1,300°C) in the kiln after paint and gloss are applied. When creating a multi-colored painting, the item will be repeatedly fired after applying each color.