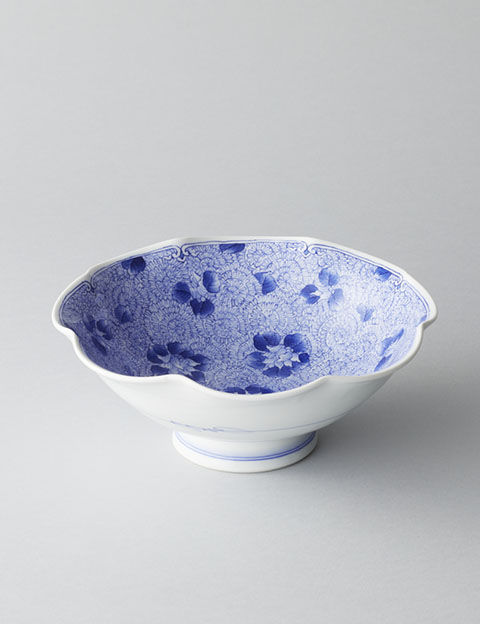 Mikawachi Yaki dates back to the building of a kiln by Korean potters that were brought back to Kyushu by landowners who joined Toyotomi Hideyoshi's campaign to the Korean Peninsula at the end of the 16th century.
The kiln here was used to fire porcelain for the Hirado clan up to the Meiji Restoration in 1868. As well as running the kiln, the Hirado clan was responsible for finding porcelain clay at nearby Amakusa and for the rapid development of skills and techniques, which are still alive today.

These wares are characterized by over-painting of cobalt on white porcelain. Ever since the kiln was first fired, pieces were sent as tributes to both the court and warrior families. As a result, this porcelain is of the highest quality, whether for everyday use or as special decorative items. The degree of care required produce items of such beauty and their delicacy are part of Mikawachi Yaki’s well-established reputation. Today, a great amount of tableware is being produced for use at some of Japan's finest restaurants. Items for use in tea ceremony are also produced alongside incense burners, sake flasks and vases.

Mikawachi Yaki features gosu (cobalt blue) painting on white porcelain. The pieces are always created as luxury goods of such revered quality that they were often offered to the Emperor and the Shogun ever since the kiln opened. Mikawachi Wares are well-known for their delicate elegance and sophistication.

Pottery stones in the Amakusa region are used for Mikawachi Wares’ raw material. They are biscuit-fired at around 900°C after shaped through wheel throwing, hand-twisting, casting and other methods. After being painted with gosu and applying gloss, the biscuit is fired again at 1,300°C.