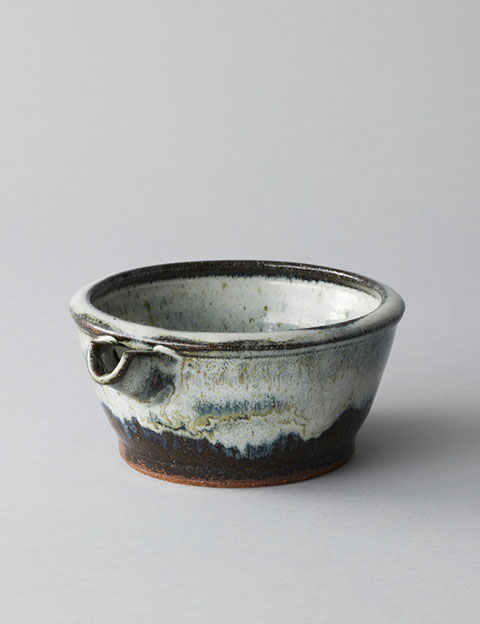 When Hosokawa Tadatoshi moved from the fief of Buzen to take control of the fief of Higo in 1632, he appointed as master potters Genhichi Hinkoji and Hachizaemon Katsuragi, whose respective descendants would continue to produce pottery for generations. The appointment of these two men marked the birth of Shodai Yaki.
Just over two centuries later, in 1836, Senoue Rinemon, an official of the Shogunate, built the Senoue kiln under a directive from the local clan to promote industry in the area. Handed down over the years, the skills and techniques associated with the production of Shodai Yaki have been inherited by the Noda and Chikashige families, who use them to this day.

Made from a local iron-rich clay, Shodai Yaki exhibits a bold yet simple character. By varying the blend of glazes and taking advantage of the changes that result from different firing temperatures, delicate blues, yellows and whites can be produced. The extravagant free-flowing patterns and the deep color of the glaze harmonize with the forms of the pieces to produce their bold simplicity.

The local iron-rich clay gives Shodai Yaki a simple yet robust feel. The subtle blues, yellows and whites are the result of various proportions of glaze and different firing temperature. The patterns created by the dynamic glazing create a unique harmony with the shape of the product.

The elutriated clay is wheel-thrown and molded before being dried and biscuit-fired at around 800°C. The biscuit is then dipped in or covered with a glaze composed mainly of straw ash or wood ash and fired at 1,300°C.