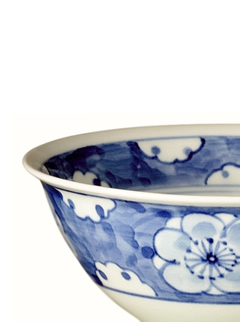 In the old fief of Amakusa on the island of Kyushu, fine porcelain stone was discovered in the early 17th century and the local villagers were encouraged to support themselves by making pottery.
Even before the 1670s, Uchida Sarayama porcelain was being produced in Amakusa and was later followed by porcelain from kilns such as that where Takahama Yaki was produced. Toward the end of the 18th century, the Mizunodaira style of pottery was established in what is now the city of Hondo and continues to be produced to this day, occupying a place in the market for everyday tableware with a contemporary feel.

The local clay shrinks very little during firing, has a good plasticity and contains just the right amount of alkali, making it ideal for both porcelain and glazes. The resulting porcelain can be a pure translucent white or possess a warmth derived from the use of isu wood ash (Distylium racemosum). A particular feature of the pottery is its vast range of unique pieces produced using black or red glazes.

Amakusa pottery and porcelain is fashioned into a vast range of tableware and other household items that serve contemporary needs.

Amakusa clay is an ideal material for porcelain because it shrinks very little during firing, has good plasticity and is moderately alkaline. It can be used to produce both clear white porcelain and, together with distylium ash, a glaze having a warmer touch. Amakusa pottery is characterized by its unique finishes, including a double-glazed red made from aka-namako (red sea slug) and a black glaze.

Amakusa clay and other local clays are molded, glazed and then fired at 1,250°C for ceramics and 1,300°C for porcelain.