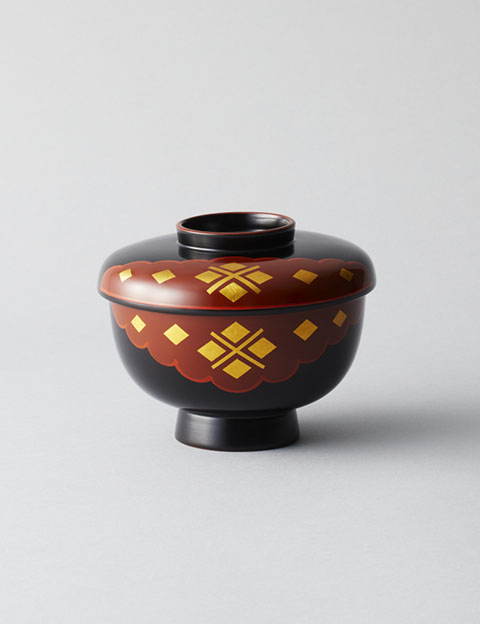 Hidehara lacquerware began when Ohshu Fujiwara ruled over Hiraizumi, Iwate Prefecture toward the end of the Heian era (794-1185). Fujiwara’s support was instrumental in the construction of Chusonji temple and its famous hall, Konjikido, as well as the creation of many fine pieces of Buddhist art.
Although Fujiwara’s influence subsequently declined, by the end of the Edo era (1600-1868), the production of lacquerware was in full swing in the village of Koromogawa near Hiraizumi, where it continues to this day.

The robust nature of Hidehara lacquerware comes from its priming undercoat, which is made of local materials. The decorative motifs are based on those of an ancient bowl and include a distinctive Genji cloud motif and the yusoku hishimonyo a diamond motif. Although the gold leaf decorations may evoke the initial response, on closer inspection, the final top coat of black and vermilion lacquer and decorations play their own part in tempering the tone of the work, allowing the true beauty of the lacquer to shine through. Products include mainly bowls and trays, but also candy bowls, stacking boxes (jubako), tea ceremony implements and flower vases.

Hidehira-nuri uses hon-kataji, which said to be the strongest of lacquer base coatings. Based on traditional decorations passed down through many generations in the region, the primary patterns of Hidehira lacquerware are the Genji gumo cloud motif, and the Yusoku hishi monyo diamond motif. At first glance, Hidehira lacquerware may appear lacquerware due to its use of gold leaf. However, when examined closely, the top coat of black or red lacquer and decorations possess a finish that restrains any excess brilliance, allowing the natural glossy beauty of the lacquer to be fully appreciated.

First, the raw wood of Japanese zelkova or horse chestnut trees is prepared according to the product‘s intended use and hardened with raw lacquer. Any weak points are covered with a cloth, and a mixture of raw lacquer and powder is applied to strengthen the area. The surface is polished repeatedly to produce a smooth finish. The piece is then coated with a polishing mixture and raw lacquer and polished again before being hardened with a grindstone. Next, the piece is coated with black lacquer and polished repeatedly, before receiving a top coat of black or red lacquer. Finally, the cloud designs are drawn, the gold leaf is applied to the surface and the finishing designs are drawn outside the clouds.