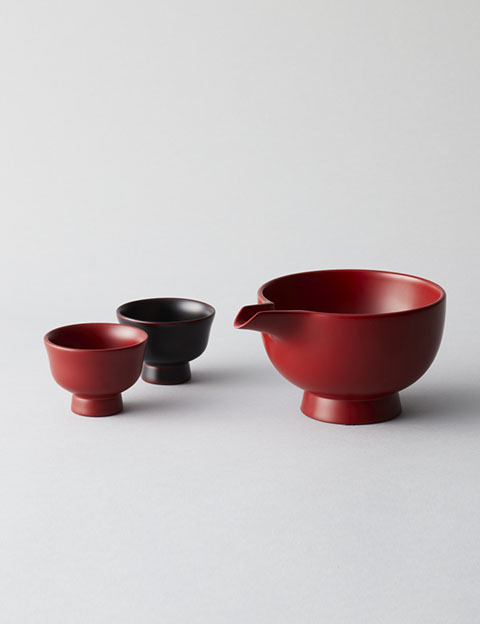 Joboji-nuri takes its name from the Joboji family, who ruled the northern part of Iwate Prefecture during the middle ages and also gave the area its name.
According to local legend, monks were dispatched to the area when a famous high priest named Gyoki built Tendaiji temple there during the Nara era (710-794). Lacquerware techniques were reportedly introduced at the same time, enabling the monks to make their own tableware.
Joboji-nuri was an important product to the ruling Nambu clan during the Edo era (1600-1868) and spread from Tendaiji temple to the adjoining area now known as Ajiro-cho, where it became known as Oyama-goki lacquerware. Today, the area remains the center of the region’s lacquerware production.

Lacquerware items of the like used since ancient times, including soup bowls, rice bowls and lipped bowls, are still produced in the Joboji region. Some of the traditional bowls are patterned, but most have a sophisticated matte finish of plain vermilion, black or clear lacquer that shows off the wood. Perhaps the most important feature of Joboji lacquerware is its everlasting quality, which stems from the use of high-quality materials. The main products today are soup and rice bowls, trays and flower vases.

Joboji-nuri has long been used for everyday items, including soup bowls, rice bowls and lipped pouring bowls. While some traditional bowls have decorations, most are unmarked and feature a monochrome vermillion, black or brown finish that restrains the excess glossiness. The Joboji region in Iwate prefecture is the largest producer of lacquerware in Japan and boasts high-quality products of the finest materials, with timeless charm.