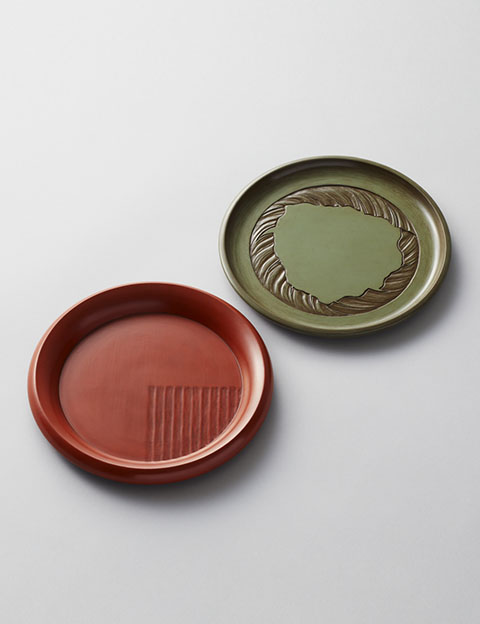 The introduction of Zen Buddhism from China during the Kamakura era (1185-1333) brought with it many related arts and crafts. Sculptors of Buddhist images and carpenters who built temples and shrines were influenced by examples of carved lacquerware called tsuishu and tsuikoku that were among these imports from China.
A new style of lacquerware peculiar to Kamakura was developed by these craftsmen, who began lacquering wood carvings. In the early days, they made mostly large containers for burning incense at Zen Buddhist temples, but with the rise in popularity of the tea ceremony at the end of the Muromachi era (1333-1568), their range of products expanded to include items such as tea utensils. However, it was not until the beginning of the Meiji era (1868-1912) that everyday items in started to appear in the Kamakura wood carving style.

Kamakura wood carvings have some special qualities that are not found in other types of lacquerware, including a method by which the three-dimensional appearance of the carving is emphasized by applying a black ink called makomo sumi to the vermilion lacquer. In addition, the bold patterns of the carving are strongly expressed by the unique carving techniques. The distinctive products of this technique include trays, plates, coasters, bowls and boxes of all sizes.

The unique quality of Kamakura wood carvings is apparent from the bold, powerful patterns that seem to leap from the surface. These patterns are brought to life by the use of specialized carving methods and the application of Makomo charcoal over the red lacquer, which enhance the three-dimensional effect to produce a result that can be found nowhere else.

The three main steps of producing Kamakura wood carvings are shaping the wood base, carving and coating. The unique techniques employed include leaving knife scars where there is no design, scattering charcoal and rice powder on the piece after the lacquer is painted but before it has dried and using balls of soot to darken the red lacquer while it is drying.
The combination of these techniques give Kamakura wood carvings a rough, antique finish. Japanese Judas wood is used for its softness and pliability. The three primary wood-shaping techniques used are hikimono-kiji, in which the wood is carved using a turning lathe, sashimono-kiji, in which the wooden boards are assembled using joinery, and kurimono-kiji, in which a shape is carved out of a wooden board.