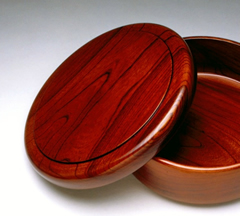 The earliest examples of Odawara lacquerware were made with wood from the abundant forests near the mountains of Hakone in the Muromachi era (1333-1568).
Later, the iro-urushi-nuri technique of applying colored lacquer was introduced when the Hojo government invited lacquerware craftsmen to the town to develop the local craft. The practice may have been established during the Edo era (1600-1868), when lacquer was applied not only to weapons and armor but also to household goods, including soup bowls and trays.

The special features of Odawara Lacquerware include its high-quality lathe work and the degree to which the lacquer brings out the full beauty of the woodgrain. Odawara lacquerware involves two techniques: kijiro-nuri, in which clear lacquer is used, and suri-urushi-nuri, in which raw lacquer is rubbed firmly into the polished surface of the wood. The main items produced today include bowls, plates, trays and coasters.

Odawara lacquerware is unique for its advanced lathing techniques and lacquer applications that reveal the full natural beauty of the underlying woodgrain, including suriurushi-nuri, which uses extremely thin layers of lacquer, and kijiro-nuri, which uses a finishing lacquer of incredible clarity.