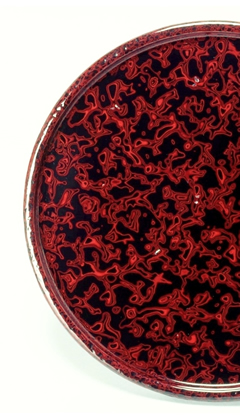 It was the beginning of the 17th century when this craft got its start, very much founded on the plentiful supplies of local Japanese cypress for the production of carcasses for goods rich in local color. Subsequently the craft developed under firm patronage from the Owari Tokugawa clan through the Edo Period (1603-1868) and this craft became popular with those travelling along the Nakasendo Highway.
At the end of the 19th century, sabitsuchi, an essential clay for a primer was discovered in the area, and this made it possible to produce a lacquer ware with a strength others could not boast.

A number of distinctive effects are used. Natural lacquer is rubbed into the wood for shunkei-nuri, so as to express the natural qualities of the base material. For tsuishu a number of layers of colored lacquer are applied before it is rubbed down to produce a speckled pattern. A number of different colors are used throughout a repeated design for nuriwake roiro-nuri.

The characteristic features of Kiso shikki are Shunkei-nuri, which brings out the natural beauty of the wood texture, Tsuishu layered red lacquering, and Nuriwake-roiro-nuri, which allows a wide variety of colors and geometric patterns to be applied in the lacquering process (Iro-urushi).

In order to preserve the natural beauty of the Japanese cypress wood, the lacquer is rubbed into the wood for Shunkei-nuri lacquering. In Tsuishu lacquering, a layer of rust regional rust clay is applied, and then many layers of red lacquer are applied on top. The lacquer is then carved to reveal the underlying clay layer in a variety of intricate patterns. The Nuriwake-roiro-nuri technique involves separating many different lacquer colors on the same object to create a pattern, and then polishing the piece to a finish.