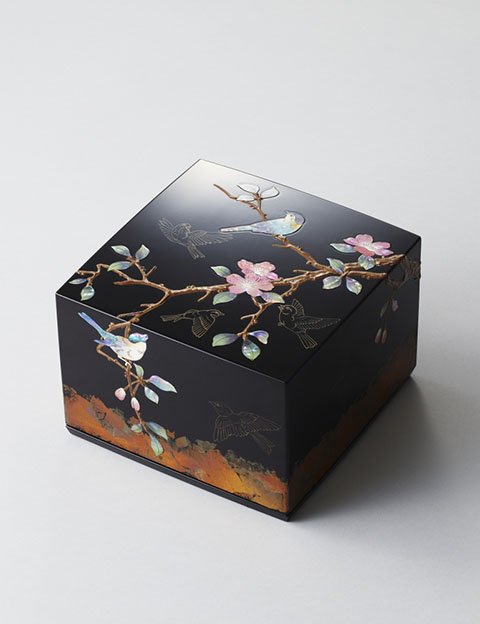 The Takaoka lacquerware craft was established at the beginning of the Edo era (1600-1868) when the lord of the Kaga clan built Takaoka castle in what is now the city of Takaoka. Soon, lacquerers began making all types of household goods as well as armor and weaponry.
Later, the Chinese lacquering techniques tsuishu and tsuikoku were introduced, and other techniques using multiple colored lacquers and deep relief carving to produce a three-dimensional effect also appeared. Takaoka lacquerware is decorated using techniques including sabi-e, which uses a grinding power mixed with natural lacquer, raden, which uses iridescent shells, and zonsei, which consists of colorful lines. With the gradually ascendancy of the merchant classes, Takaoka lacquerware flourished, and soon a wide range of local lacquering techniques were used to produce flamboyant decorations for the floats used in the local festival.

Cultivated by its long history, the techniques of Takaoka lacquerware remain alive and well. Yuusuke-nuri combines the sabi-e technique with beautiful stones set on a base of black lacquer with hints of red and green. Chokoku-nuri features a deep relief and multiple colors with a three-dimensional appearance. The glittering aogai-nuri technique uses the rainbow effects of abalone and turban shells to produce flower and bird motifs and scenes of nature. This rich repertoire of styles is used to produce trays, boxes and other household items.

Representative techniques of this lacquerware tradition include yusuke-nuri, which features a deep red base decorated with gems and stones, and sabi-e illustrations. Other techniques include chokoku-nuri, which uses a variety of colored lacquers to create three-dimensional designs, and aogai-nuri, which uses abalone, turban and other shells that have a shimmering rainbow quality to depict landscapes, flowers and birds.

The wood used to produce Takaoka lacquerware is formed through joinery, bending and lathing. Then, using the various representative techniques, the solid base and middle coats are applied, followed by the highly skilled topcoat application.