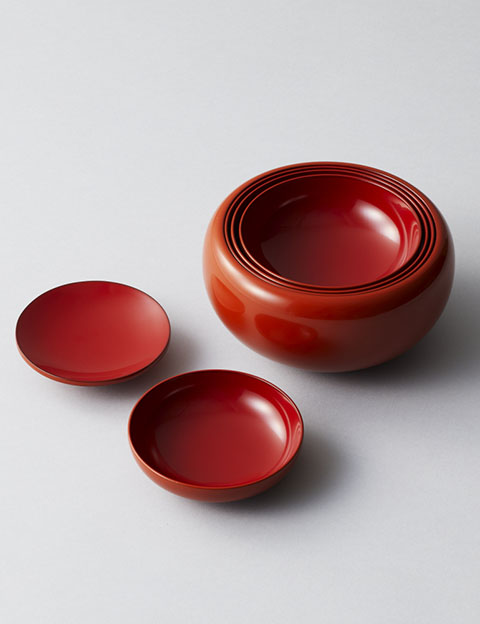 Although the oldest item considered to be Wajima lacquerware is the shunuri-tobira made during the Muromachi era (1392-1573), other lacquerware items and tools have been discovered at archaeological sites dating back to the Kamakura era (1185-1333), indicating that lacquerware was produced much earlier. During the Edo era (1600-1868), Wajima lacquerware was known for its durability and was being used by farmers and merchants across Japan. By the end of the 19th century, it was also being used in restaurants and inns and its designs had become grander and more decorative.

It may not be possible to tell by looking at the finished piece, but parts susceptible to breaking have been reinforced with cloth and multiple coats of lacquer. Lavish decorations are sometimes applied by the chinkin technique, in which a design is engraved into the lacquer and then filled with colored lacquer. Another decorative technique is maki-e, in which gold dust is used to create a design. Products include a wide range of tableware and small pieces of furniture.

One might not guess from looking at the finished product, but fabric has been pasted onto the more fragile areas and numerous layers of lacquer have been applied. Exquisite gold inlays or gold-sprinkled lacquer patterns are then applied on top. Using the same techniques, damaged lacquerware can be repaired and used again as if it were new.

A rough wooden base is made from high-quality wood, after which fabric is affixed to the more fragile areas with lacquer. For the base coat, zinoko (diatomite powder) is mixed with lacquer and applied in several layers. Next, raw lacquer is applied directly to parts that are susceptible to chipping. Finally, after the middle and top coats have been applied, decorations like gold inlays or gold-sprinkled lacquer are added.