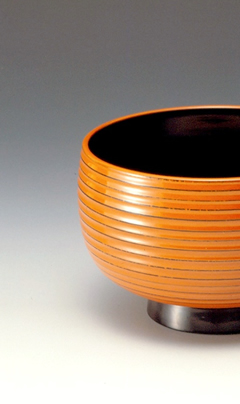 The origins of this craft date back to the second half of the 16th century, when a group of craftsmen moved into the area in search of good materials and began turning bowls and other things.
These craft skills took root in the vicinity of Yamanaka hot springs and by the 18th century, the development of the craft went in step with the hot springs as bowls, trays and a variety of other household as well as novelty items were being made and sold to those visiting the spa. During the first half of the 19th. century, maki-e technique of applying gold and silver powders was introduced and this became the basis of Yamanaka's own highly appealing raised maki-e technique.

Many lacquer ware craftsmen from Yamanaka continue to win prizes for their work, which draws such praise at exhibitions of traditional crafts, especially for pieces employing skills and techniques known as sensuji, a pattern in extremely fine lines, and another called zogan or inlay technique. Undoubtedly one of the special features of Yamanaka Shikki is the raised maki-e work that can be seen on bowls and other items. This is done by mixing gold or silver powder with lacquer before it is applied. Many people are now familiar with the way that Yamanaka Shikki sympathetically blends as sense of the modern with traditional sentiments. Much is still being made, including a wide range of tableware such as bowls, trays, coasters and stacking boxes or jubako used for food on festive occasions. A significant number of pieces for the tea ceremony, especially natume or caddies for the powdered green tea are also made.

Pieces made employing “kashoku-biki techniques“ (traditional carving techniques for making decorative patterns) to produce exceptionally fine grooves (sensuji) or inlays (zogan) are very highly valued. Another feature of Yamanaka Shikki is the embossed gilt lacquerwork (Taka-maki-e) where the lacquer portion (Maki-e) is raised and which can be observed on bowls and other pieces. They are very popular as household wares, fusing classic taste with modern sensibility.

In order to minimize distortions, the wood to be used as rough material is cut longitudinally and, after a rough wooden base has been made on a potter's wheel, it is treated with zinoko powder and top coats of vermilion and black lacquer are applied. Finally, embossed gilt lacquer decorations are added on top. Each stage is performed by different craftsmen who are experts in their respective techniques. Besides the embossed gilt lacquer decorations, some pieces are also given a thin, color lacquer finish (suriurushi) to highlight the "Kashoku-biki” work.