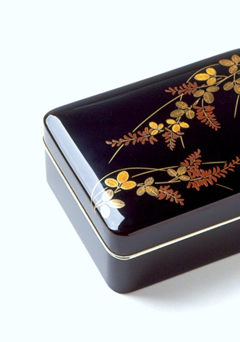 The Kaga clan, which held sway over the area now known as Ishikawa Prefecture, actively promoted the arts and many crafts. Kanazawa Shikki was just one of those and dates back to the beginning of the Edo period (1600-1868).
The feudal lord at the time invited the well-known lacquerer, Igarashi Doho, to came and work in the area. His name had been associated with a style of lacquer work called Kodaiji maki-e work, which was so representative of Momoyama period (1573-1600) culture. Craftsmen skilled in inro-maki-e were also invited to work in Kaga from Edo (Tokyo), and helped formulate the Kaga tradition. Fostered as it was by the Kaga clan, Kanazawa Shikki became a unique lacquer craft combining a boldness representative of a warrior culture with a beauty of a noble culture.

The Kaga maki-e work of Kanazawa Shikki is not simply equal in stature to the beautiful maki-e gold and silver lacquer work of Edo and Kyoto. It is also produced using the finest finishes and decorative techniques on carcasses of the finest quality, and remains a reminder of the highly developed affluent feudal culture of Kaga and Kanazawa. Many fine household articles are still being made alongside special pieces for the tea ceremony and vases for flower arrangement.

Kanazawa shikki is created making the best use of Kaga gold-sprinkled lacquer (Kaga-maki-e, which is favorably compared with Edo-maki-e and Kyo-maki-e) as well as other advanced techniques in the woodcarving and lacquering departments, conjuring up the old atmospheres of the Kaga Hyakumangoku saga.

Woods such as ginkgo, cypress and ate are used to create a rough wooden base which is then transformed into elegant Kanazawa Shikki by undergoing a series of stages such as the kawari-nuri coating stage and the decorative stage whereby flat gold-sprinkled lacquer, embossed gilt lacquerwork (Taka-maki-e) and burnished gold-sprinkled lacquer (Togidashi maki-e), are applied.