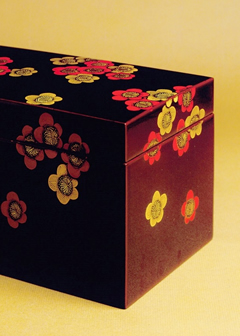 The maki-e technique of laying down gold and silver dust was preceded by techniques that first came into being during the Nara era (710-794), when Japan was under the influence of Tang-dynasty China. The same techniques continued to be used and were developed further during the Heian era (794-1185), when the capital was moved to Heian-kyo (modern-day Kyoto).
Kyoto became the center of the country's lacquerware industry during the Muromachi era (1333-1568), and the popularity of its style of lacquerware spread along with the tea ceremony, which was flourishing in the capital at the time. Many fine pieces were produced thanks to the technical expertise of renowned lacquers. Together with the knowledge they handed down, superior craftsmanship became the driving force behind this craft.

With such a long history, Kyoto lacquerware is imbued with a deep sense of wabi-sabi, an essential Japanese quality of peaceful simplicity unmatched by other production centers. The work is completed with great care and attention, down to the smallest detail. Kyoto lacquerware also has a formal beauty and, in addition to being of superior design and excellent quality, it is also robust. The main items in production today include tableware, tea ceremony items and furniture.

Kyoto lacquerware has a long, rich history and is characterized by wabi-sabi, an aesthetic view based on the acceptance of transience and imperfection, which is not seen in styles from other production centers. Its main features are its elegant and sophisticated design, its robustness, its beautiful two- and three-dimensional elements and its delicate finish.

The wooden bases are created using various techniques, including sculpting, lathing and steam-bending. Then, the body is consolidated, fabric is applied and the piece is treated with sabitsuke (raw lacquer mixed with polishing powder) and thoroughly sanded before the intermediate and top coats are applied. In the decorating stage, first patterns are drawn in lacquer, then gold and silver powder are applied and finally raising, blurring and color alterations are performed to enhance the three-dimensional effect. Fragments of limpet shells may also be embedded to create various patterns.