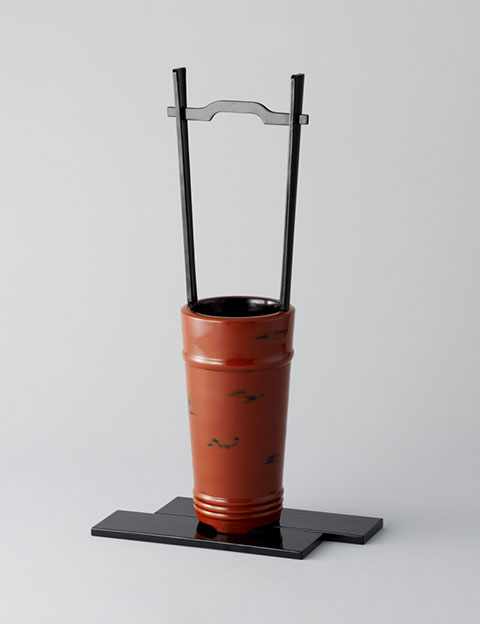 Wood turners settled in what is now Shiga Prefecture toward the end of the Muromachi era (1392-1573). These craftsmen used wood from the abundant local supplies of Japanese cypress to make wooden soup bowls. This led to the production of shibujiwan bowls, which were primed with the tannin-rich juice extracted from persimmons.
With the rise in popularity of lacquerware during the Edo era (1600-1868), the area of Kishu became known throughout the country as the greatest producer of shibujiwan bowls. Originally known as kuroe-nuri, with an increase in production, the style was rebranded as Kishu lacquerware, the name by which it is known today.

This style of lacquerware can be used on a daily basis and is characterized by its robust simplicity. Representative production techniques include kuroe-nuri and negoro-nuri. Items produced today range from traditional designs to contemporary tableware, tray, candy bowls and stationery boxes.

Kishu lacquerware is coated using the kuroe-nuri and negoro-nuri techniques and consists mainly of everyday items that leave an impression of simplicity and durability.

Lacquerware comes in many shapes and sizes, each with its own methods of production. If we consider a simple round tray, the processes to create the wooden base, apply the coating and decorate the exterior typically comprise 50 to 70 stages and take about three months to complete. Various stages are handled by different artisans who spend a decade or more building expertise in their respective specialties, which include creating the wooden base, applying lacquer and laying gold leaf.