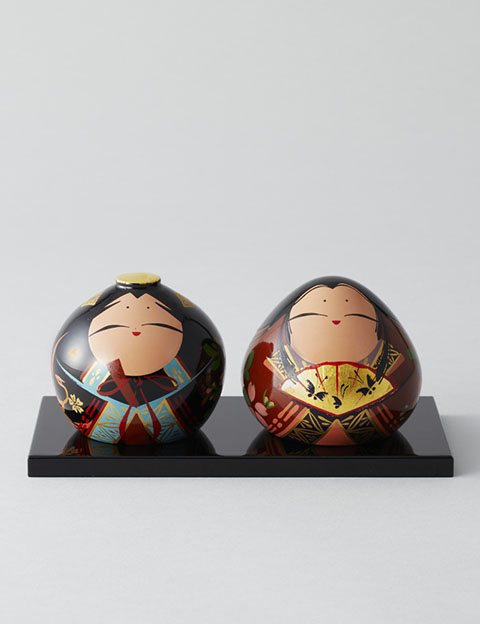 During the Muromachi era (1392-1573), Ouchi, who was a prominent figure in what is now Yamaguchi Prefecture, promoted trade with Korea and Ming-dynasty China. As part of his efforts, he encouraged the local production of lacquerware for export. The skills that were developed as a result persisted long after the trade had ended and are still with us today.

Yamaguchi, which is situated on the western end of Honshu, was often referred to as the “Kyoto of the West,” perhaps because of its air of refinement. Retaining something of that air, Ouchi lacquerware is first undercoated with a dull vermilion, after which motifs of autumn grasses are applied in a yellowish green lacquer. Next, cloud forms are added, followed by the Ouchi family crest in gold leaf. The mainstays of modern production include large trays, plates, coasters and figures.

Ouchi lacquerware techniques have been passed down from ancient times in Yamaguchi, which came to be known as the “Kyoto of the West.” To create its distinctive patterns, first a base coat of Ouchi vermilion is applied, then autumn grass is drawn using a yellowish green lacquer, next cloud shapes are added and finally the Ouchi diamond crest is affixed in gold leaf.

The manufacturing process can be divided into four stages: wooden base creation, base painting, coating and decoration. The wooden base is made from ilex rotunda, Japanese cherry birch, cypress or zelkova wood. The base is coated with shibu shitaji, which is made from persimmon tannins, using the hana-nuri technique. For the decoration of Ouchi-wan bowls, first bengara-urushi laquer, then gold dust and finally the lacquer top coat are applied.